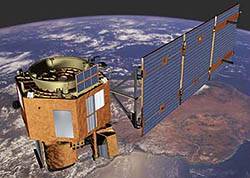 EO-1's main goal is to flight-validate a set of advanced land imaging (ALI) instruments that will reduce the costs of future Landsat missions. The spacecraft is in an orbit that allows it to fly in formation with Landsat 7 and take a series of the same images. Comparison of these "paired scene" images is one way of evaluating EO-1's instruments. Future use of ALI technology will cut the mass and power consumption by a factor of seven compared to the Landsat 7 imager. EO-1 uses a pulsed plasma thruster for pitch and axis control and momentum management.

EO-1 is a component of NASA's EOS (Earth Observing System).