Principle of the pulsed plasma thruster. 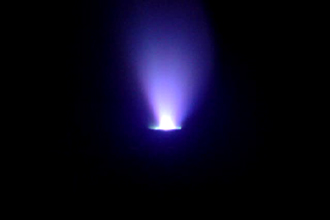 A PPT in operation. Image: NASA. 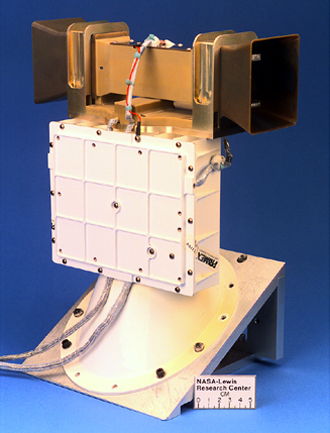 A pulsed plasma thruster (PPT) is a type of electromagnetic propulsion system , with a high specific impulse and low power and fuel requirements, that has been used on a number of satellites for station-keeping maneuvers.

A PPT works by ablating and ionizing material from a fuel bar (typically consisting of a chlorofluorocarbon such as Teflon) with the current from a discharging capacitor. The positive ions released are then accelerated between two flat-plate electrodes – one positive, the other negative – arranged in the form of two long parallel rails which are connected across the capacitor. Escaping from the spacecraft, the accelerated ions produce a thrust of some several hundred newtons. The capacitor is then charged up again from a power supply and the pulse cycle repeated.


Use of PPTs aboard spacecraft

The EO-1 PPT was developed at the NASA Glenn Research Center and produced by Primex Aerospace Company. Several tests of the thruster were carried out at Glenn to demonstrate life capability, characterize contamination of spacecraft surfaces, and verify performance. EO-1's PPT is capable of producing a thrust of 860 micronewtons (0.0002 lb) and an exhaust velocity over 13,700 m/s (30,600 mph), while consuming only 70 W of power.

To put these numbers into perspective: the force of this level of thrust on the spacecraft is the same as the force you would feel by holding a 2- by 2-in piece of paper in your hand, and this exhaust velocity, in a space environment devoid of atmosphere, can achieve a top speed almost twice that of the Space Shuttle (18,000 mph).