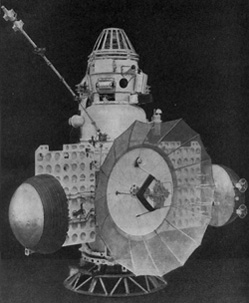 Zond was a series of Soviet probes (Zond simply means 'probe') that consisted of two entirely different sets of missions. Zonds 1 to 3 were 900-kg, Venera-class spacecraft sent to fly by Venus, Mars, and the Moon, respectively. Communication with the first two was lost en route. (Zond 2, incidentally, was the first spacecraft to make use of a pulsed plasma thruster.) Zond 3 successfully sent back pictures of the Moon's farside of much superior quality to those returned by Luna 3, before going into orbit around the Sun. Zonds 4 to 8, by contrast, were much larger, 5-ton vehicles derived from the Soyuz Earth orbital craft which formed an early stage of the Soviet Union's L-1 project to send humans on circumlunar flight (see Russian manned Moon programs).

Several flight tests of the L-1 had already failed because of problems with the new Proton launch vehicle. Then, in early Mar 1968, Zond 4 was placed in Earth parking orbit and successfully sent out to a lunar distance (though not in the direction of the Moon) to test the L-1 communication system at that range. During the six-day mission, cosmonauts in a bunker on Earth spoke to mission controllers through a relay transmitter on board the spacecraft. Upon return from cislunar space, Zond 4 was to make a relatively low-g, double-skip entry, and land in Soviet territory. However, the probe's astronavigation system failed, forcing the descent module to make a simple ballistic reentry. With the quickly falling probe heading for an Atlantic splashdown, far from any Soviet recovery ship, the spacecraft was deliberately blown up off the Bay of Biscay, France, to prevent it from falling into American hands.

The first spacecraft to loop around the Moon and return to Earth. Aboard was a small menagerie including turtles, wine flies, meal worms, plants, seeds, and bacteria to investigate the effects of radiation and other potential hazards in lunar space. On September 18, 1968, Zond 5 flew around the Moon, coming as close as 1,950 km. Upon its return, the astronavigation system again failed but the wayward capsule splashed down in the Indian ocean and was successfully recovered by a Soviet tracking ship.

By this time, the race for the Moon reaching its climax. The CIA had informed NASA decision-makers of the Soviet Union's intent to fly a manned circumlunar mission in the near future. With the successful Earth-orbit mission of Apollo 7 in October 1968, the Command and Service Modules (CSM) were deemed ready for a lunar mission. However, with the ground testing of the Lunar Module (LM) months behind schedule, there was no way for the United States to mount a previously planned lunar orbit test of the LM to beat the Soviets if they went for an early attempt. Instead, it was decided that only the CSM would be launched on a lunar orbit mission in late Dec. For the Soviets to be first with their own manned mission, they needed the next L1 test-flight to go without a hitch. In the event Zond 6 did manage to do for the first time what all the L1/Zond probes were supposed to do upon returning to Earth-dip into the atmosphere, skip off, and then enter a second time. The idea of this double reentry was to make it easier for humans returning from the Moon. Whereas Zond 4 experienced forces of 10-15g, Zond 6 suffered only 4-7g. Unfortunately, the capsule depressurized near the end of its flight causing the altimeter to fail which in turn led the parachute line to be jettisoned at a height of 5.3 km and the capsule to crash (just 15 km, as it turned out, from its launch point at Baikonur). What the Soviets publicly hailed a success, was in fact a bitter blow to their lunar ambitions. As the Dec 7 lunar launch window approached, a heated debate took place over whether to put a man onboard the next L-1 launch. The cosmonauts training for the mission wrote to the Politburo, saying they were ready to take the risk and arguing that success would be more likely with a human at the controls. Whether this persuaded officials to attempt a manned launch is not clear. What is certain is that after the Proton with its L-1 was rolled out to the pad, a series of problems meant that the launch window was missed. Meanwhile, on Christmas Eve 1968, the crew of Apollo 8 entered lunar orbit and the record books.

There was to be a chilling postscript. The following month, the delayed Proton was rolled out to its pad for with an unmanned L-1: there would be no risking a human passenger now that the race to circle the Moon first was over. The rocket took off and, as its second stage ignited, blew up. The launch escape system also failed, putting it beyond all doubt that had a cosmonaut been on board, he would have been killed.

Three weeks after Apollo 11 touched down on the lunar surface, Zond flights resumed. Zond 7 looped around the Moon, sent back the first color photographs of the Moon by a Soviet spacecraft, and executed a perfect entry and landing to become the first totally successful flight of the L-1 program. A little over a year later, Zond 8 became the last of its kind, ending its circumlunar foray with a single rather than the planned double reentry.