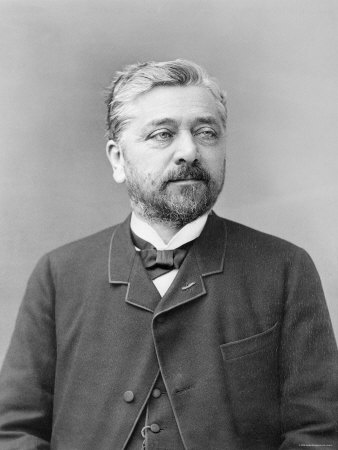 Alexandre Eiffel was a French engineer best known for his design and construction of the Eiffel Tower (1887–89), from which he carried out experiments in aerodynamics. In 1912 he founded the first aerodynamics laboratory.

The Eiffel Tower was built for the Paris Exhibition of 1889. At 308 m (1,010 ft), it was the tallest building in the world until the Chrysler and then the Empire State Building were erected in New York. The Eiffel Tower in its immensely prominent position in the center of Paris marks the final acceptance of metal, in this case, iron, as an architectural medium. Eiffel's iron bridges are technically and visually as important as the famous Tower (Duoro, 1876–77; Garabit Viaduct, 1880–84). He was also engineer to the Bon Marché store in Paris (1876), and to the Statue of Liberty in New York, both of which have remarkable iron interiors.