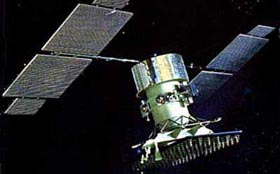 Ekran was a long-running series of Soviet and Russian geosynchronous communications satellites. Work on Ekran ("screen") began in the late 1960s, initially using hazardous technologies. The satellite was to have been boosted into orbit by a Proton rocket fitted with a new high-performance upper stage using fluorine/amine propellants, and the satellite itself was to have been powered by a 5-kW nuclear reactor. However, by 1973 both these ideas had been abandoned. The first Ekran was launched in October 1976, 27 months after Molniya 1S, the first Soviet geostationary experiment. Early Ekrans were mainly for test purposes but also enabled 18–20 million additional Soviet citizens to watch programs of the Central Television. Problems with the Proton booster led to delays in putting the system into operation. The original Ekrans were very short-lived and carried just a single transponder. In the second half of the 1980s, they were replaced by Ekran-M's which carried two transponders and generally kept on working well beyond their three-year design life. The final satellite in the Ekran-M series was launched on April 7, 2001, on the maiden flight of Russia's new Proton-M booster.