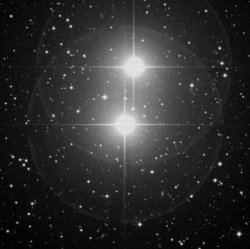 Epsilon Lyrae is the fifth brightest star in the constellation Lyra and one of the most famous multiple stars in the sky: a naked-eye double (on a very clear, moonless night) that a 6-centimeter telescope with high magnification shows to be a quadruple system made up of two pairs of stars; it is commonly known as the Double Double.

Epsilon1 consists of two stars, of magnitude 4.7 and 6.2 magnitude, that orbit about their center of gravity every 1,200 years. Epsilon2 consists of a magnitude 5.1 and 5.5 pair with an orbital period of 585 years. In addition Epsilon1 and Epsilon2 orbit around each other in a huge orbit, with a separation of 0.16 light-year and a period measured in hundreds of thousands of years.