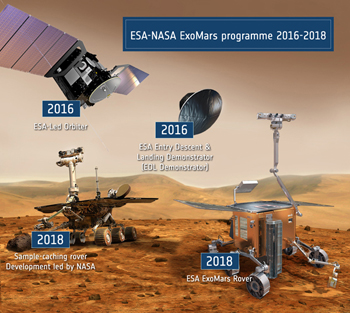 ExoMars is a Mars exploration program to be conducted jointly by ESA (European Space Agency) and NASA. It will consist of two missions: the first, comprising an Orbiter and an Entry, Descent and Landing Demonstrator will launch in 2016; the second, consisting of two rovers, will launch in 2018. Among the chief goals of the program are to look for signs of life on Mars and to demonstrate new technologies that may be used by a Mars sample-return mission in the 2020s.

Among the essential flight and in-situ enabling technologies that ExoMars will demonstrate for future missions are:

· Entry, descent and landing (EDL) of a payload on the surface of Mars;
· Surface mobility with a Rover;
· Access to the subsurface to acquire samples; and
· Sample acquisition, preparation, distribution and analysis.

At the same time a number of important scientific investigations will be carried out, for example:

· Search for signs of past and present life on Mars;
· Investigate how the water and geochemical environment varies
· Investigate Martian atmospheric trace gases and their sources.

The 2016 ESA-led mission, to be launched by NASA, includes a Mars Orbiter and an Entry, Descent and Landing Demonstrator Module (EDM). The Orbiter will carry scientific instruments to detect and study atmospheric trace gases, such as methane. The EDM will contain sensors to evaluate the lander's performance as it descends, and additional sensors to study the environment at the landing site.

The 2018 mission is a NASA-led mission and includes two rovers, one European and the other American. Both rovers will be transported in the same aeroshell and will be delivered to the same site on Mars. The ESA Rover will carry a drill and a suite of instruments dedicated to exobiology and geochemistry research.