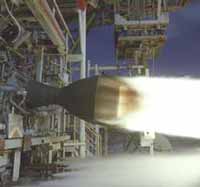 The Fastrac engine is a low-cost rocket engine, with a thrust of 270,000 N, propelled by liquid oxygen and RP-1, that was being developed at the Marshall Space Flight Center as the propulsion unit for the X-34 reusable rocket plane. With the cancellation of the X-34 project in 2001, work on the Fastrac engine also came to a halt. At the time, Fastrac was only the second of about 30 new rocket engines built over the past quarter of a century, to originate in the United States. Fastrac was less expensive than similar engines because of an innovative design approach that used commercial, off-the-shelf parts and fewer of them. Some of its characteristics, including its range of thrust and specific impulse, are shared with the Merlin 1 engine used on SpaceX's Falcon 1.