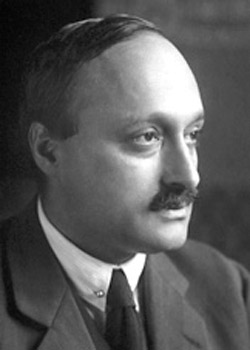 James Franck was a German-born US physicist who, with Gustav Hertz, experimented with electron bombardment of gases, providing support for theory of atomic structure proposed by Niels Bohr in the internal structure of the atom is quantized (see quantum mechanics). Franck and Hertz shared the 1925 Nobel Prize in Physics for these studies on the changes of energy occurring when atoms collide with electrons. In 1935 Franck when to the USA and became a US citizen. He worked on the development of the atom bomb with the Manhattan Project but in 1945 drew up the "Franck petition" saying the bomb should not be used against Japan. With Edward Condon, he was responsible for the Franck-Condon principle, which assumes that the nuclei in vibrating molecules do not have time to move during electronic transitions.