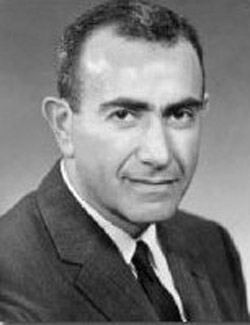 Herbert Friedman was an American space scientist and astrophysicist who played an important role in the development of X-ray astronomy. After earning a PhD from Johns Hopkins University (1940), he spent most of his career at the US Naval Research Laboratory. He pioneered observations of the X-ray sky using rocket-borne instruments. Although X-rays from the Sun were first detected in 1948 by T. R. Burnright, they were studied systematically from 1949 by Friedman and his colleagues, who observed X-ray activity throughout a full solar cycle of 11 years. Friedman also studied solar ultraviolet radiation and in 1960 produced the first X-ray and ultraviolet photographs of the Sun. In 1965, his observations of an occultation of the Crab Nebula by the Moon proved that Tau X-1, the second X-ray source to be detected beyond the Solar System, coincided with the Crab.