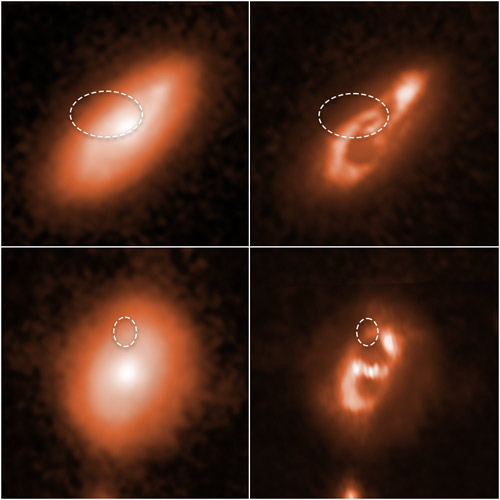 Astronomers using the Hubble Space Telescope tracked down two brief, powerful radio bursts to the spiral arms of the two galaxies here. The two images at left show the full Hubble images of each galaxy. The two digitally enhanced images on the right reveal each galaxy's spiral structure in more detail. The catalog names of the bursts are FRB 190714 (top row), and FRB 180924 (bottom row). The dotted oval lines in each of the four images mark the location of the FRBs.

A fast radio burst (FRB) is an extremely energetic pulse of radio waves that may last from a fraction of a millisecond to a few milliseconds. The first was discovered in 2007 in archival pulsar data by Duncan Lorimer and his student David Norkovic of West Virginia University. Since then hundreds of others have been found, most as single events but in a few cases as ones that repeat.

The greatest number of fast radio bursts observed from a single source was reported by an international team led by Di Li and Pei Wang at the Chinese Academy of Sciences. The Five-hundred meter Aperture Spherical radio Telescope (FAST) was used to detect more than 1600 radio bursts over a period of two months from an object called FRB 121102.

Although they are relatively weak once they reach Earth, astronomers know that the bursts involve the release of large amounts of energy – a year’s worth of the Sun’s total energy output over the span of just a few milliseconds, for example. A variety of theories have been put forward to explain FRBs, including merging black holes, magnetized neutron stars known as magnetars, and exotic defects in the early structure of the universe.