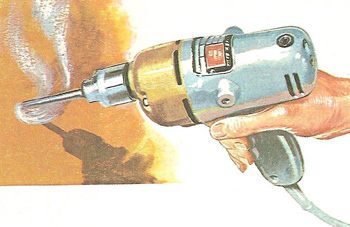 As the hole is drilled, some of the mechanical energy of the revolving parts of the drill is converted, by friction, into heat energy. 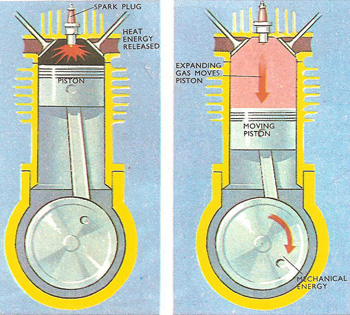 One of the fundamental laws of physics is that you can't get something for nothing. For example, a gasoline engine will refuse to function if the tank has run dry. Before the engine can give mechanical energy to the car, it must be given at least as much energy of a different kind – the chemical energy bound up in the gas tank.

This law works both ways. We can't get nothing at all from something. If the mixture of gasoline vapor and air in the engine cylinders is ignited, then it's impossible for there to be no energy at all coming out of the engine. Not all of the outcoming energy is the kind of energy wanted – mechanical energy to move the car. Much of it is converted into heat, and wasted. But, whether it is wasted heat, or useful mechanical energy, the total amount of energy is exactly the same as the amount of energy released. None of it can ever be lost.

This law is known as the law of conservation of energy – energy can be neither created nor destroyed. It is also an integral part of a law known as the first law of thermodynamics.

Thermodynamics is the branch of physics which deals, among other things, with the movement of heat from one place to another, and the conversion of heat energy into other forms of energy.

In addition to saying that energy is conserved, the first law defines "heat energy" and "mechanical energy". It might seem obvious that mechanical energy is the kind of "energy of motion" possessed by any moving object, while heat energy is something that makes things hotter. Often, however, the distinction between these two kinds of energy does not seem so cut and dried. In the cylinders of an internal combustion engine, for instance, a mixture of gases is being alternately compressed and expanded as the pistons move up and down within the cylinders. The gas mixture is ignited when its volume is small, i.e. just after it has been compressed. At this instant, heat energy from the chemical reaction is given to the gas.

Heated gases invariably expand if they are able. Because their energy is increased, the molecules of the gas are pushed further apart. As this happens, they push against the piston, making it move. The gas is said to do work against the piston, and as the gas does work part of the original heat energy is converted into mechanical energy. Mechanical energy is transferred from the moving piston to the moving crankshaft, and from there to the wheels of the car.

The energy that results from the expansion and the work done is the mechanical energy. But the gases are always hotter than they were before the explosion. They always retain some of the energy. This other kind of energy is called internal energy. The first law of thermodynamics states that the internal energy together with the mechanical energy equal the heat energy initially supplied to the gases.

Thermodynamics never deals with the movements of the individual particles of matter involved – the molecules of gas in this example. It deals only with the behavior of the gas as a whole. It is easier in thermodynamics to juggle with quantities like, pressure, temperature, and volume, of a fairly large number of molecules, all behaving in roughly the same way.

But although thermodynamics never bothers with individual molecules, internal energy, and mechanical energy do mean something when applied to molecules themselves.