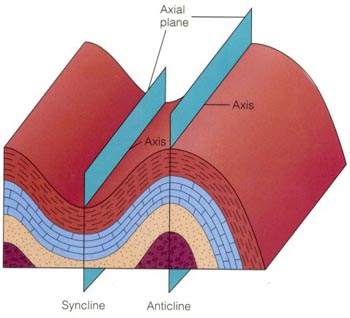 Fig 2. Compression creates folds in the Earth's crust. First, a simple fold may be created, probably by a symmetric anticline (A). But if there is a continuation of pressure, the fold may become uneven and develop into an asymmetric anticline (B). At a later stage, a recumbent fold may develop (C). The anticline is then lying on top of the syncline and the layers of rock on one side of the anticline are inverted. If pressure continues to be exerted, these layers will thin and eventually break to produce an overthrust fold (D). When these layers disappear due to stretching and fracture, a nappe is formed (E). Over a long period this nappe may be pushed out many kilometers from its original position.

Fig 3. A symmetric anticline (1) and syncline (2) have limbs that dip at similar angles on either side of the axial plane of the fold. The position of the axial plane of an asymmetric anticline (3) and of a syncline (4) may be more difficult to establish. Where compression produces a reverse fault (5) one side of the fault (in this case the left) overrides the horizontal strata on the other side. In the case of a monocline fold (6), rock strata lying at two levels may be separated by a limb that is relatively steep.

Fig 4. Domes and basins are folds that are about as wide as they are long. They are due to complex compressions of the crust. Isolated domes can be due to the subterranean rise of magma or rock salt.

A fold is a buckling in rock strata. Although folds are rock waves whereas faults are cracks, both are caused by the intense pressures of continental drift. They often form structural traps for valuable mineral deposis. Folds that are convex upward are called anticlines; those convex downward, synclines. The upper portions of anticlines have often been eroded away. Folds vary greatly in size from a few millimeters to hundreds of kilometers across.


How folds and faults form

Folds and faults are usually well developed in both sedimentary and volcanic rocks. They may also form in plutonic rocks such as granite and gabbro. Correct interpretation of their structure is essential in mining. Recumbent folding and reverse faulting can cause beds of coal, for example, to be repeated vertically, while normal faulting can cause a horizontal gap. A coal seam may thus be passed through several times in drilling, or alternatively missed altogether.

Faults that develop above an intrusive granite allow mineralizing fluids to pass into the overlying rocks and there deposit minerals such as lead, tin, zinc, and copper ores. Similarly, faults that do not reach the surface may form channels up which oil and gas can rise. In downward folds, where porous sand-beds overlie impermeable clays and shale, collections of water form which can produce artesian springs.

Movement of the massive plates of rock that compose the Earth's crust produces intense pressure at the margins of the plates.Where two plates converge, these sometimes throw the rocks up into highly folded and faulted mountain chains. At other plate edges, stretching pulls the rocks apart and forms long depressions bounded by faults, such as the rift valleys of East Africa.

There are three main kinds of folds. First true, or flexure, folding forms by the compression of competent (strong) rocks. This may grade into the second type, flow folding, in areas where incompetent (weak) rocks occur. The incompetent rocks behave like a thick paste; they cannot easily transmit pressure and many minor folds usually form. Third, shearing folding may occur in brittle rocks by the formation of minute cleavage-like fractures in which thin slices of rock are able to move in relation to each other like a pack of cards pushed in from the side. Except where cut by a fault, all folds eventually die out by closure, the shape of the fold resembling a half basin or dome.

Simple folds usually occur in young rocks like of the Tertiary and Quaternary eras. Complex folds are found in older rocks which have been exposed to earth movements for a longer period and which have often been deeply buried within the Earth's crust. Very old rocks, such as the Precambrian of Norway, have been refolded many times with the development of structures such as boudinage, mullion, and cleavage. These ancient rocks have also been considerably altered by heat and pressure from igneous intrusions and deep burial. Platy minerals, such as micas, then develop parallel to each other and the rock tends to split easily along thin planes. Rocks with this property are known as schists.

With increasing distance from the source of pressure that causes folding, the folds gradually die out both in horizontal and vertical directions. This is well displayed in the Alps where the folds become less complex to the north and also to the west.