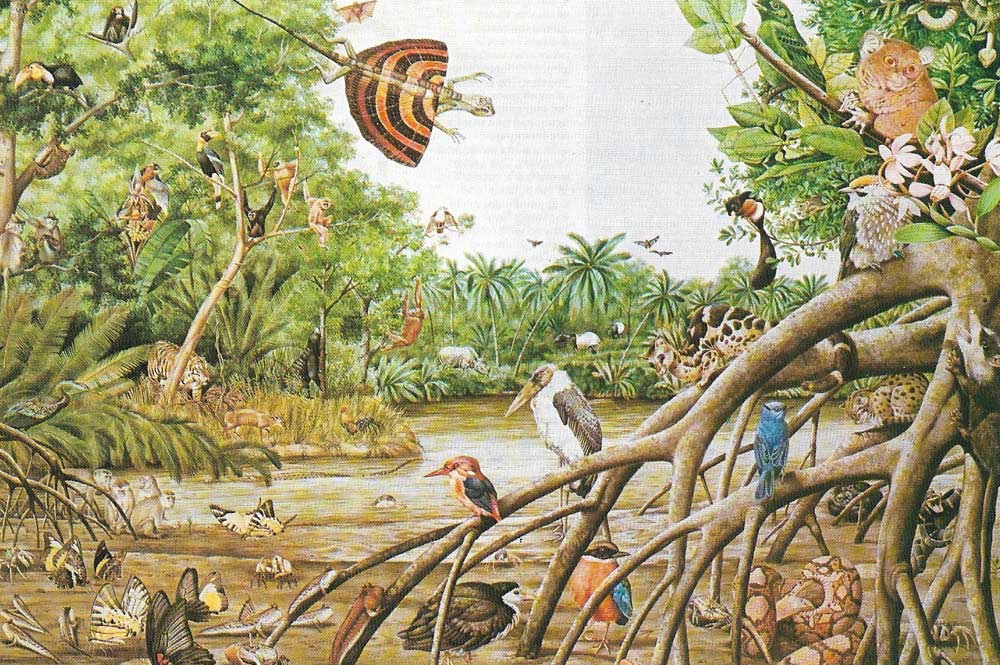 Southeast Asia forests contain perhaps the richest populations of animals and plants in the world. A single hectare of forest may contain 60 different species of trees and an island may support more than 150,000 species of animals. A few are shown in this picture, with a key below. Within forests most animals forage for food beside watercourses or lakes where vegetation is less dense and where light penetrates. Many animals in the forest are adapted for specialized feeding, for colonizing a particular niche or for moving about within the layers of the forest. 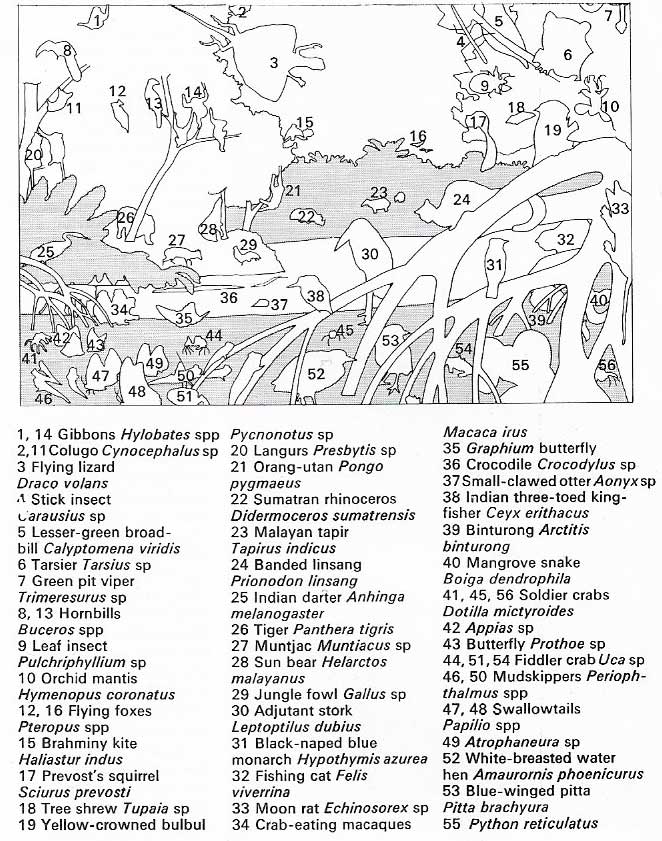 Fig 2. Weaver ants (Oecophylla smaragdina) are commonly found in all rainforests of Southeast Asia. They build nests in trees and bushes by binding living leaves together with silken threads. Although the ants are unable to produce silk their larvae bear silk glands. Construction of a new nest commences when a team of worker ants forms a bridge between two leaves. While one set of workers draws the leaves together a second set commandeers the silk-secreting larvae (not shown) to spin a web of silk across the gap, thus gluing and sealing the leaves together. 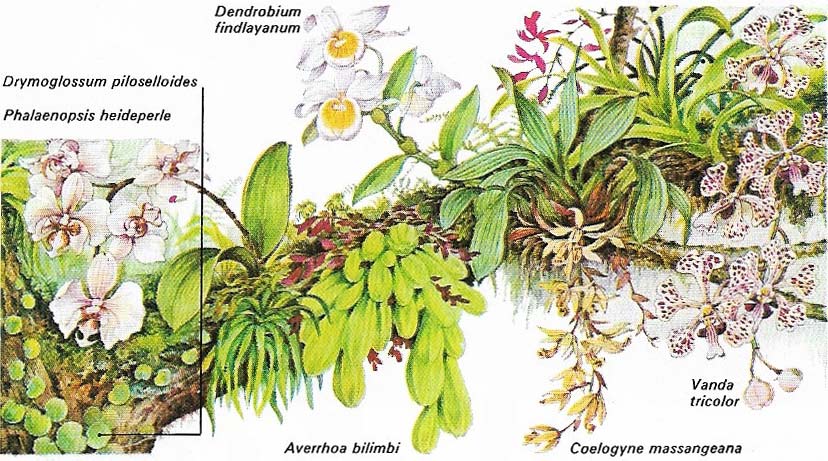 Fig 3. Mosses, lichens, ferns, and orchids grow on branches of trees such as Averrhoa, where they receive sunlight and are nourished by humus in the bark. Accumulations of these epiphytes trap water and provide a suitable home for a varied host of invertebrate animals. 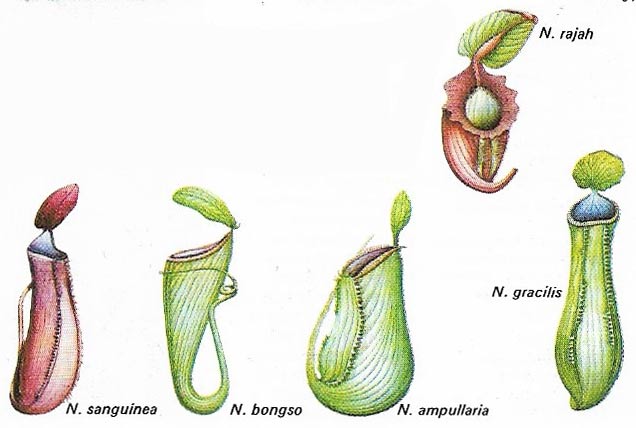 Fig 4. The pitchers of the Nepenthes genus of plants are expanded leaves modified for catching insects. Ants, flies, and beetles are lured to the pitchers by the scent of nectar and become trapped. Insects are probably eaten to obtain nitrogen, which is scarce in the heavily leached soil. There are about 60 different Nepenthes species which are found only on the Malayan archipelago. 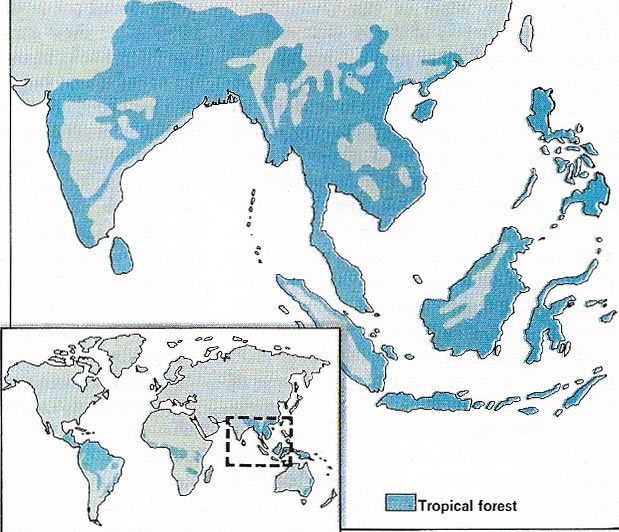 Fig 5. Rainforests would grow in all the areas shown in blue on the map were it not for man. They are now found only in the Western Ghats of India, Sri Lanka, Burma, Thailand, Laos, Malaysia, the Philippines, Borneo, Sumatra, and the Celebes.

Rainforests are the natural vegetation of major parts of Southeast Asia and the Indian subcontinent (Fig 5), but as a result of human activities they have virtually disappeared in large areas, especially in India, Bangladesh, and Indochina. Where they still exist, in climates of high constant temperature and high rainfall, there grows the greatest diversity of plants found anywhere in the world. With animals ultimately dependent on plants for food, the forests have also provided for the development of one of the richest animal communities in the world.

Trees growing in the Southeast Asia rainforests are taller than their related species in African and South American rainforests, with the "emergent" often reaching a height of more than 70 m (225 ft). These giant trees begin branching only at about 45 m (147 ft) above the ground, but produce wide, spreading crowns, equipped with thick, leathery leaves adapted in shape to allow rapid drainage of rain from their surface. Their most striking feature is a thick buttressed trunk: because the thin but nutritious soil supports only a shallow rooting system, the buttresses – often 11 m (35 ft) high – are needed to provide stability against buffeting winds and rain.

The animal community of the emergent zone is made up almost exclusively of birds, insects, and bats. Because the climate lacks marked seasonal changes, trees can flower and fruit throughout the year, thus providing animals with a continuous supply of food. Hornbills (Buceros and Aceros spp) feed on the fruits of the "emergent" using their strong, curved bills to push through the foliage; butterflies, bees, and wasps feed on the nectar of flowers, and fruit-eating bats, Megachiroptera, strip trees of their produce. Swifts (Hemiprocne and Chaetura spp) fly high above trees, feeding on insects, while eagles (Ictinaetus and Spilornis spp) and other birds of prey hover above, waiting to pounce on small vertebrates.

Below the emergent zone is the forest canopy where the crowns of buttressed trees, fig trees, and trees producing such exotic fruits as durians, mangosteens, and rambutans merge to form a continuous layer of leafy vegetation about 45 m (147 ft) above the ground.

The canopy is a home and major food source for many animals. There, gibbons (hylobates spp) and the Malayan and Sumatran siamangs (Symphalangus syndactylus) swing from branch to branch in search of fruit, leaves, and flowers. Orangutans, found only in Borneo and Sumatra, forage for fleshy fruits. The giant squirrel (Ratufa indica) leaps between trees in search of nuts, fruits, and even birds' eggs. Minivets (Pericorocotus spp) flit between branches, feeding on insects, while the fruit-eating barbets (Megalaima spp) may be found nesting in holes in trees. Insects – butterflies, beetles, ants, wasps, and bees – abound and provide food for insectivorous bats.

The middle zone of the rainforests is composed of trees adapted to shade and high humidity, 30–33 m (98–101 ft) high bearing deep, narrow crowns and trunks and branches covered in flowers. A tangle of ferns that live on trees, climbing lianas, and vines and parasitic "strangler" figs, wrapped and twisted around the branches and trunks of canopy trees, also add to the foliage.

Many of the animals of the middle layer are highly adapted for movement between trees. Several species of lizards (Draco spp), frogs (Rhacophorus spp), squirrels (Aeromys spp), and flying lemurs (Cynocephalus spp) bear extensible flaps of skin that allow them to glide large distances from tree to tree.

The binturong (Arctictis binturong) has claws and a prehensile tail for climbing, while the long tails of langurs (Presbytis spp) and proboscis monkeys (Nasalis larvatus)which live mainly in swamp regions are used only for balancing as they leap between the branches. The more terrestrial macaques (Macaca spp) possess much smaller tails. The calm, humid climate of the middle layer has also allowed flying insects to evolve enormous wings, which they use in their search for specific flowers and fruits.

In primary rainforests the shrub layer is rather sparse and consists mainly of woody plants and young growing trees, which reach a height of about 5.5 m (18 ft). However, where light penetrates to the inner forest, or in secondary forests, this layer becomes much denser and bears numerous broad-leaved herbaceous plants. On the margins of rivers and lakes palm trees and mangroves thrive. Such areas are the home of the nocturnal tarsier (Tarsius spp) which leaps from branch to branch as it searches for lizards, spiders, and insects. The leopard (Panthera pardus) sits on an overhanging bough awaiting its prey. Vipers (Vipera spp), pythons (Python spp), and tree-snakes (Boiga spp), which feed on small mammals, reptiles, and birds, wrap themselves around the thick branches. Broadbills (Calyptomena spp), shamas (Copsychus spp), and flycatchers (Terpsiphone spp) fly swiftly through the foliage. But by far the most numerous animals are the insects – camouflaged stick and leaf insects, grasshoppers, crickets and cicadas, beetles, butterflies and moths and ants, bees and wasps – of which more than 100,000 species have been described. It is possible that a comparable number remain undiscovered.