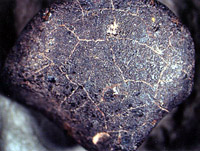 A fusion crust is a charred layer on a meteorite formed by the freezing of surface melt at the end of a meteorites high-speed atmospheric flight. When a meteorite tears through the atmosphere at between 12 and 72 km/s, friction with the air can raise its surface temperature to 4,800 K. At these temperatures the surface minerals melt and flow backwards over the surface. As the meteorite slows and the fireball is extinguished, the molten minerals begin to cool and fuse together to form a thin, glassy skin which envelopes the whole meteorite. Often the fusion crust is black or bluish-black though it can be light colored and transparent. It helps to make the meteorite stand out against the background of terrestrial rocks.