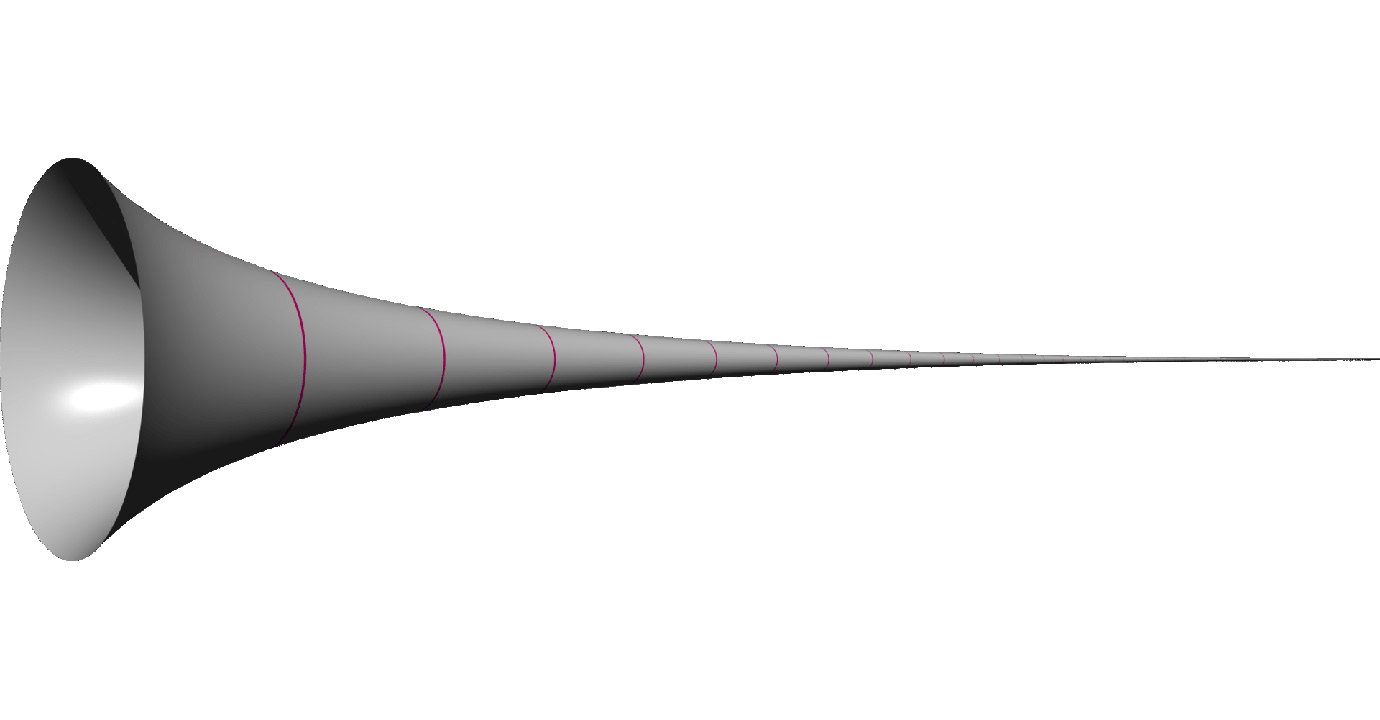 Some shapes aren't hard to imagine or depict but they can still have seemingly bizarre properties. One of these is known as Gabriel's Horn or Torricelli's Trumpet, because it was first investigated by the Italian physicist and mathematician Evangelista Torricelli (1608–1647) in the early 17th century.

As a young man Torricelli studied in Galileo's home at Arcetri, near Florence, and then, upon Galileo's death, succeeded his teacher as mathematician and philosopher for their good friend and patron, the Grand Duke of Tuscany.

Although best known for his invention of the barometer he also made important contributions to maths, none more so than his discovery of the famous Horn, which prompted a fierce debate about the nature of infinity while delighting others. Torricelli's mathematical compatriot Bonaventure Cavalieri wrote:

I received your letter while in bed with fever and gout… But in spite of my illness, I enjoyed the savoury fruits of your mind, since I found infinitely admirable that infinitely long hyperbolic solid which is equal to a body finite in all the three dimensions. And having spoken about it to some of my philosophy students, they agreed that it was truly marvellous and extraordinary that that could be.

Gabriel's Horn is the surface of revolution of the curve of y = 1/x, a rectangular hyperbola, for values of x greater than 1. A surface of revolution is just a surface produced by rotating a line or a curve about some axis. For instance, a sphere is the surface of revolution that comes from spinning a circle about its diameter. Gabriel's Horn is formed when the curve of y = 1/x, for x > 1, is rotated about the x-axis. Torricelli was astonished to find that although the Horn has a finite volume, equal to π cubic units, it has an infinitely large surface area! How could a surface with an infinite area enclose a finite volume? Torricelli tried, by various means, to prove that the area was in fact finite, but failed.

This state of affairs led to what's been called the 'painter's paradox' because it seems that if Gabriel's Horn were filled with paint there wouldn't be enough of it even to coat the surface. Surely you can't cover something that's infinitely big with something else of which there's only a finite amount! Yet if you fill Gabriel's Horn with paint, there must surely be enough of it (with plenty left over) to cover its entire inner surface. Using real paint, made of atoms and molecules, this is true enough. There comes a point at which the Horn becomes too narrow for any more molecules of paint to fit, so the paint ends up covering only a finite part of the surface. Also, if we assume atoms to be spheres, they only touch the surface at single points, so what it means for the paint to 'cover' the surface becomes less clear. The fact is that if we're talking about a real-world situation in which physical paint's involved we have to make the Horn physical too. This means that it narrows off to a certain point at which it's so thin that it's less than an atom or molecule wide. A physical Horn has to end here, resulting in both its volume and surface area being finite.

With hindsight, we can appreciate that using special, mathematical paint, which can be applied as thinly as need be, without limit, the paradox that tasked mathematicians and philosophers at the time of Torricelli never arises. The thickness of the coat can be made vanishingly small at a rate quickly enough to compensate for the ever-expanding area, enabling a strictly finite volume of paint to coat an infinitely large surface. Unfortunately, Torricelli lived just before calculus appeared on the scene. Otherwise, he would have understood that the apparent paradox of the Horn could be explained in terms of the infinitely small quantities known as infinitesimals.