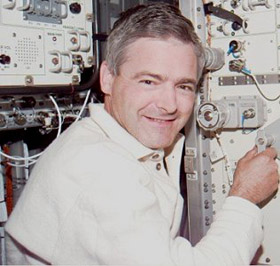 Marc Garneau became the first Canadian in space. Seconded to the Canadian Astronaut Program from the Department of National Defence in February 1984 to begin astronaut training, he flew as a payload specialist on Space Shuttle Mission 41G in October 1984. He was named Deputy Director of the Canadian Astronaut Program in 1989. Selected by NASA for astronaut candidate training in July 1992, Garneau worked for the Astronaut Office Robotics Integration Team and served as CapCom (Capsule Communicator) during Shuttle flights. He subsequently flew as a mission specialist on STS-77 in 1996 and STS-97 in 2000. In February 2001, Garneau was appointed executive vice president of the Canadian Space Agency. He received a BS in engineering physics from the Royal Military College of Kingston (1970) and a PhD in electrical engineering from Imperial College of Science and Technology, London (1973).