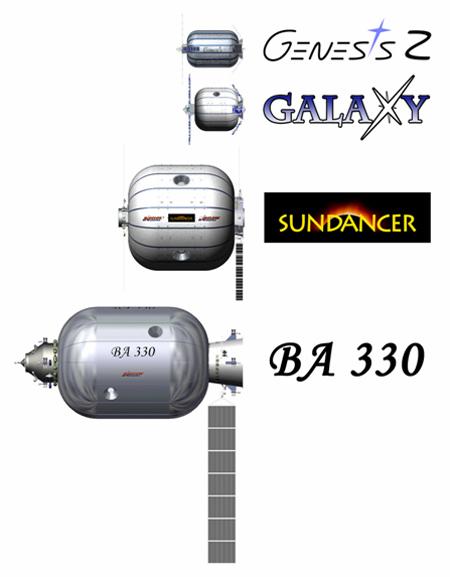 Genesis is an inflatable Earth orbiting module developed by Bigelow Aerospace as a one-third scale prototype of the firm's expandable space habitat design. Genesis 1, the first Genesis module, was placed in 550-km- (340-mi-) high orbit by a Russian Dnepr rocket on Jul 12, 2006, and successfully inflated two days later. The craft is expected to remain in orbit for about five years while engineers test the durability of the design. One of the key tests for the craft is whether it can maintain a constant internal temperature and pressure, suitable to support life.


design of the Genesis module

The Genesis craft is 4.5-m (15-ft) long and has a diameter of 2.4-m (8-ft), one-third of the size of a full-scale craft. It is built around a rigid central core and two solid bulkheads. The inflatable walls are composed of a range of materials including Kevlar and a fibrous textile called Vectran. The walls are designed to be airtight and tough, to withstand the impact of space debris and small meteorites. On a full-scale module, each wall would be 40 cm (16 in) thick. To launch the module into space, the craft was carefully folded so that it could be placed into the fairing of the rocket.

A second Genesis module, Genesis 2, was successfully launched on Jun 28, 2007. Genesis 2 uses essentially the same physical design as its predecessor but includes extra instruments that will monitor the craft's vital signs and 22 cameras – nine more than flew on Genesis 1.

Genesis 1 and 2 are the first in a series of increasingly complex inflatable spacecraft planned by the company. In 2008, Bigelow Aerospace expects to launch another, larger craft called Galaxy and in 2010, a module called Sundancer – which would be three times the diameter of the Genesis modules and is designed to be able to support a crew of three. These flights are intended to certify critical subsystems, such as life support and power generation equipment.

All four flights will culminate in the deployment, in 2012, of a full-scale prototype called BA 330 – the 330 designating the cubic meters of the module's internal volume. The BA 330 will dock with Sundancer in orbit.

Eventually, the company hopes to build a space hotel, dubbed Nautilus, which will link a series of modules together.