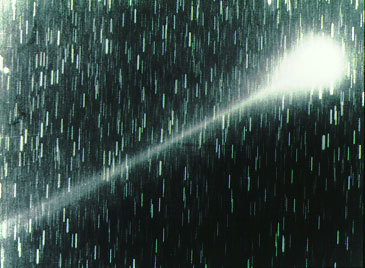 Comet Giacobini-Zinner (officially designated 21P/Giacobini–Zinner) is short-period comet that is the parent body of the Draconids (also known as the Giacobinids) meteor shower. It became the first comet to be visited by a spacecraft when the International Cometary Explorer (ICE) flew past it at distance of 7,800 km on September 11, 1985. Every alternate appearance of the comet is favorable for observers on Earth and can result in a visual magnitude as high as about 7. The 1946 appearance was especially noteworthy as the comet passed only 0.26 AU from Earth in late September; it was then near magnitude 7, although it experienced an unexpected outburst that caused it to reach magnitude 6 during the first days of October. It was discovered by the French astronomer Michel Giacobini (1873–1938) in 1900 and rediscovered two returns later, in 1913, by the German astronomer Ernst Zinner (1886–1970).