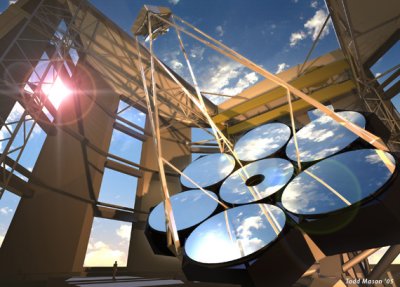 The Giant Magellan Telescope is a segmented mirror telescope that will be the largest optical telescope in the world upon its completion, currently scheduled for 2016. The Giant Magellan Telescope (GMT) will use six off-axis 8.4-m segments around a central core on-axis segment to form an optical surface with a collecting area equivalent to that of a single mirror with a diameter of 21.4 m (80 ft). It will have a focal length of 18 m, a focal ratio of 0.7, and a resolving power about ten times greater than that of the Hubble Space Telescope.

The Giant Magellan Telescope is a collaborative effort involving a number of different universities and research organizations, which include: the Carnegie Institution of Washington, University of Michigan, Harvard University, Massachusetts Institute of Technology, Smithsonian Astrophysical Observatory, Texas A&M University, University of Arizona, the Australian National University, and the University of Texas at Austin. It will probably be located in central or northern Chile.