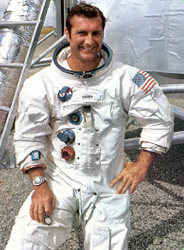 Richard Gordon was an American astronaut who walked in space during the Gemini 11 mission and orbited the Moon on Apollo 12. Gordon received a BS from the University of Washington in 1951 before entering the United States Navy and serving as a flight test pilot. In 1960 he joined Fighter Squadron 121 at the Miramar, California Naval Air Station as a flight instructor and won the Bendix Trophy Race from Los Angeles to New York in May 1961, setting a new speed record of 1,399 km/h and a transcontinental record of 2 hr 47 min. He was selected as an astronaut in 1963 and made his first spaceflight as pilot alongside Charles Conrad on the three-day Gemini 11 mission in 1966. Gordon and Conrad served together again in 1969 aboard Apollo 12, with Gordon as Command Module pilot. In 1971, Gordon became chief of advanced programs for the Astronaut Office and worked on design and testing of the Space Shuttle and development equipment. A year later he retired from NASA and the Navy to become executive vice president of the New Orleans Saints American football team. He is currently president of Space Age America, Inc.