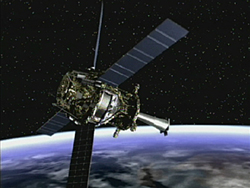 Gravity Probe B is a satellite developed by NASA and Stanford University to test two extraordinary, unverified predictions of Einstein's general theory of relativity. As the probe orbits at an altitude of about 640 km directly over Earth's poles, tiny changes in the direction of spin of four onboard gyroscopes are measured very precisely. So free are the gyroscopes from disturbance that they provide an almost perfect reference system. They measure how space and time are warped by the presence of Earth (the so-called geodetic effect), and, more profoundly, how Earth's rotation drags spacetime around with it (known as frame-dragging). These effects, though small for Earth, have far-reaching implications for the nature of matter and the structure of the Universe.

The idea of the mission was first proposed in 1959, but the project was delayed many times due to budget reviews before finally being launched in 2004. Preliminary results from the probe announced in April 2007 confirm Einstein's geodetic effect to a precision of better than 1 percent. At that time, scientists from Stanford were still trying to extract the signature of frame-dragging from the data.