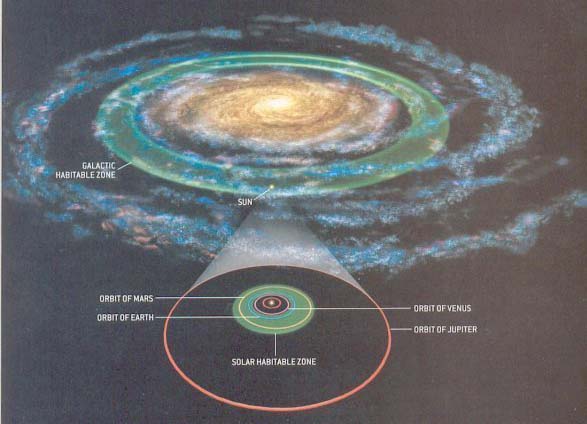 The galactic habitable zone is an annular region of our Galaxy in which it has been hypothesized that conditions are best suited to the development and survival of life as we know it. The GHZ was first proposed in 1991 by Guillermo Gonzalez of Iowa State University and Donald Brownlee and Peter Ward of Washington University, and has subsequently been endorsed by a number of other researchers, including Charles Lineweaver. Outside the galactic habitable zone (GHZ), the theory goes, various factors make the existence of complex (multicellular) life difficult if not impossible. The current GHZ is said to extend from 7 to 9 kiloparsecs (23,000 to 29,000 light-years) from the galactic center, is widening with time, and is composed of stars that formed between 4 and 8 billion years ago. The GHZ is analogous to the much more well established concept of the habitable zone of a star.

According to the GHZ hypothesis, the width of the GHZ is controlled by two factors. The inner (closest to the center of the galaxy) limit is set by threats to complex life: nearby transient sources of ionizing radiation, including supernovae and gamma ray bursters, and comet impacts. Such threats tend to increase close to the galactic center. The outer limit is imposed by galactic chemical evolution, specifically the abundance of heavier elements, such as carbon.