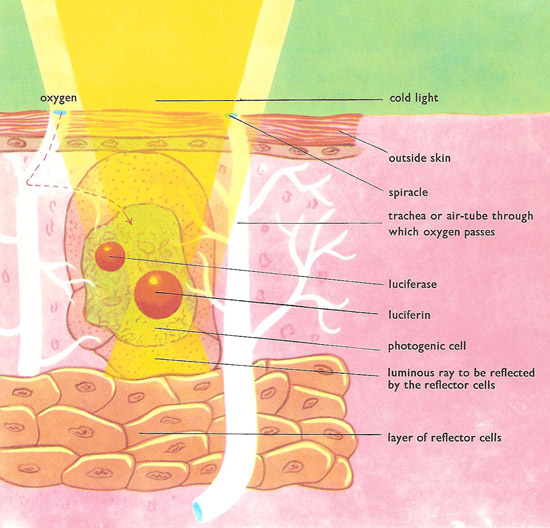 Diagram to show how a glow-worm produces cold light.

Glow-worms aren't worms at all but any of a variety of beetles and flies, also called fire-flies, which in their larval or adult forms glow due to bioluminescence. If you catch one and examine it, you'll notice that the light comes from its abdomen, which resembles a tiny bulb shining through a transparent casing. If you touch the abdomen, you'll also notice something important: it's cold. The glow-worm, in other words, produces cold light.

The generic name "glow-worm" covers a number of different species found around the world, including Lampyris noctiluca, found in much of Europe, and members of the Phengodidae family, found in North and South America. In each of these species, the hind segments of the abdomen are luminous. In some species, the luminous abdomen is found in the female only.

Like almost all insects, glow-worms reproduce by laying eggs. From these emerge larvae, which live underground or in holes in tree trunks. They are carnivorous and feed on insects and tiny snails. They bite their prey with their mandibles, and anesthetize it by injecting poisonous fluid. This enables the larva to eat at leisure.

The most interesting thing about the glow-worm is the natural phenomenon known as bioluminescence. This word means the creation of light by living creatures (the Greek word bios means life). It occurs in certain insects, myriapods, and fish.

Strange though is may seem, the glow-worm produces light as a result of breathing. Insects breathe by means of very delicate air-tubes, the tracheae, which have outside openings on the abdomen and thorax. It must be remembered that the blood of insects is not like that of the vertebrates, which carries oxygen to all parts of the body; in insects oxygen is carried direct to the tissues by an enormous number of air-tubes. The openings of these tubes, which are to be found on the abdomen and thorax of the glow-worm, are called spiracless.

In the glow-worm, the outer wall of the hind part of the abdomen is built in a special way. It consists of a number of cells fed by a dense network of air-tubes, ensuring a plentiful supply of oxygen. Among these cells are the corpuscles (blood cells) that generate the light – the photogenic cells – which are impregnated with a fatty substance called luciferin. When the oxygen reaches the photogenic cells through the air-tubes, it combines with the luciferin. This chemical reaction is helped by another organic substance, luciferase, which acts as a catalyst (a substance capable of speeding up a chemical change). The oxidized luciferase then becomes oxy-luciferin:

Oxy-luciferin is luminescent – that is to say, it gives out light. But that isn't the whole story. You know how in the headlight of a car, the light is amplified by a shining metal reflector, placed behind the bulb? The same device, in principle, is to be found in the operation in the glow-worm. Behind the layer of cells that generate light is another reflector layer, consisting of cells impregnated with urea and certain other chemical substances that have yellow coloring (xanthein). This layer acts as a mirror, reflecting and amplifying the light produced by the photogenic cells.

This then accounts for the glow-worm ability to make its body shine in the darkness with a beautiful yellow-green light.

Our examination of the glow-worm leads to certain conclusions: The process of bioluminescence in the glow-worm (and other similar insects) is a slow transformation, by oxidation, of chemical energy into luminous energy. The resulting light is absolutely 'cold', because none of the energy is used to produce heat, or for any other purpose. The yield in this method of light-production is therefore 100%. So it is brought home to us that a humble insect has achieved a perfect piece of mechanism – one that devotes to useful work (and by 'work' is meant movement, light, heat) all the energy at its disposal. It is not surprising that there are lots of people who take advantage of this ready-made facility perfected by nature. Such as the natives of Central America, and also of the West Indies who catch giant glow-worms and keep them in cages. This provides lamps as economical as they are remarkable.