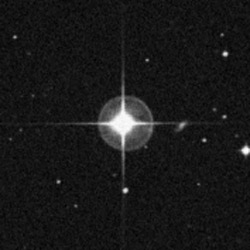 HD 130322 is a K-type star in the constellation Virgo around which an exoplanet has been found. HD 130322 b, the discovery of which was announced in 2000,1 is a planet with a minimum mass slightly more than that of Jupiter. It orbits its host star in a very small orbit at average distance of only one eighth that of Mercury from the Sun. It thus qualifies as a "hot Jupiter" or epistellar Jovian.