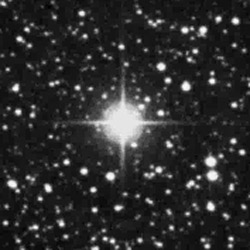 HD 177830 is a K-type star in the constellation Lyra around which has been found an exoplanet. Discovered in 1999, this planet, HD 117830 b, is at least 1.28 times as massive as Jupiter, though it may be much more massive since the inclination of its orbit is not known. The mean distance of HD 117830 b from its host star is about the same as that of Earth from the Sun; however, its orbit is so eccentric that periastron (near point to the star) occurs at only half this distance whereas apoastron is as distant as Mars is from the Sun.