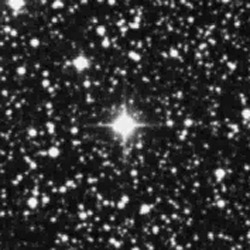 HD 187123 is a star almost identical to the Sun, in the constellation Cygnus, around which has been discovered a planet with at least half the mass of Jupiter. At one ninth the average separation distance of Mercury from the Sun, HD 187123 b orbits more closely to its host star than any other planet discovered up to that time.1 See also exoplanets.