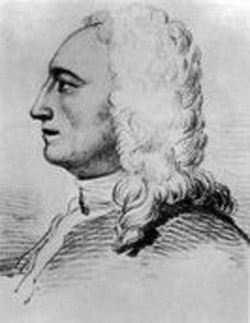 John Hadley was an English scientist and mathematician who made improvements in reflecting telescope design and invented the reflecting quadrant – a forerunner of the mariner's sextant. Hadley was the first to devise a laboratory method for testing the parabolic figure of a mirror. He placed a tiny illuminated pinhole at the mirror's center of curvature and examined the reflected cone of light in the vicinity of the image. From the appearance of this cone, he could infer the state of the mirror's surface and was thus able to pass, by successive polishings, from a spherical to a paraboloidal figure.