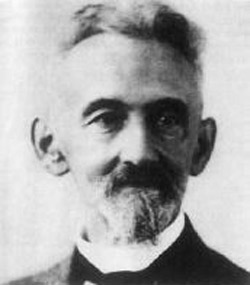 Felix Hausdorff was a German mathematician who is considered to be one of the founders of modern topology and who also did significant work in set theory and functional analysis. Among several concepts named after him is the Hausdorff dimension, which gives a way of assigning a fractional dimension to a curve or shape. He also published philosophical and literary works under the pseudonym "Paul Monger."

Hausdorff studied at Leipzig and taught mathematics there until 1910, when he became professor of mathematics at Bonn. When the Nazis came to power, Hausdorff, a Jew, felt that as a respected university professor he would be safe from persecution. However, his abstract mathematics was denounced as useless and "un-German" and he lost his position in 1935. He sent his daughter to Britain but stayed with his wife in Germany. When in 1942 he could no longer avoid being sent to a concentration camp, he committed suicide together with his wife and sister-in-law.