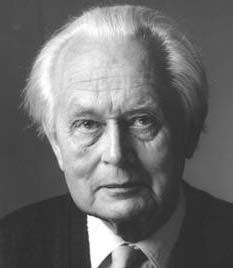 Piet Hein was an extraordinarily creative Danish mathematician, inventor, and poet who often wrote under the Old Norse pseudonym "Kumbel" meaning "tombstone." A direct descendant of the Dutch naval hero of the sixteenth century who had the same name, Piet Hein was born in Copenhagen and studied at the Institute for Theoretical Physics of the University of Copenhagen (later the Niels Bohr Institute) and the Technical University of Denmark.

He is famed for his many mathematical games, including Hex, Tangloids, Polytaire, TacTix, and the Soma Cube, his advocacy of the superellipse curve in applications as diverse as city planning and furniture making, and his thousands of short, aphoristic poems called Grooks.

TacTix is a two-player game of strategy game, devised by Piet Hein, that is essentially a two-dimensional version of Nim. Though the game is non-trivial, the first player can always win, at least in the 5-by-5 matrix version, by choosing the center piece and symmetrically mirroring the second player's moves. Players alternate taking pieces away from a 5 × 5 grid as many contiguous pieces as desired from a single row or column.

Tangloids is a mathematical game for two players devised by Hein to model the calculus of spinors. Two flat blocks of wood each pierced with three tiny holes are joined with three parallel strings. Each player holds one of the blocks of wood. The first player holds one block of wood still, while the other player rotates the other block of wood around any axis for 4π radians (two full revolutions). Then the first player tries to untangle the strings without rotating either piece of wood. Only translations (sliding the pieces) are allowed. Afterward, the players reverse roles; whoever can untangle the strings fastest is the winner.