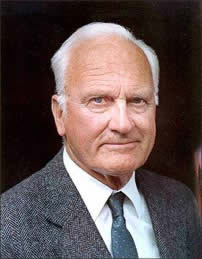 James Henry was a pioneer of aerospace medicine who developed the first partial pressure suit, a forerunner of today's spacesuits. An American citizen born in Germany, Henry came to the United States as a child but received both his M.A. in medicine (1938) and doctorate in medicine (1952) from Cambridge University, England.

Henry began his career at the University of Southern California (USC) in 1943, and while there designed a partial pressure suit for emergency extreme altitude protection that later became standard issue for military pilots. He also worked on acceleration physiology with the USC Human Centrifuge (see centrifuge). He left USC to continue his work on the pressure suit at Wright-Patterson Air Force Base and to direct the Physiology of Rocket Flight research project for the Air Force, which led to the first successful animal rocket flights. In 1963 he returned to USC in 1963 as a professor of physiology.