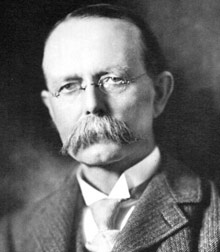 John Holland was an Irish-born US engineer who invented the first modern, gasoline-driven submarine. He offered a design to the US Navy department in 1875, but it was rejected as impracticable. After further development, the successful Fenian Ram was launched in 1881. This was not practical for extended operations, but its design was the basis for the Holland, which had an internal combustion engine for surface cruising and an electric motor for submerged operations. The US government bought the Holland in 1900.