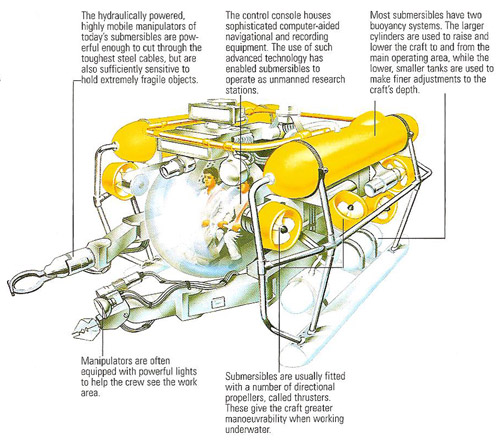 The Johnson Sea Link, a diver lockout submersible, which is equipped with pressure chambers from which divers can enter and exit, allowing them to perform work and then return to the submersible for gradual decompression.

A submarine is a ship capable of underwater operation. The idea is an old one, but the first working craft was not built until 1620, by Cornelius Drebbel; it was a wooden frame covered with greased leather. The first submarine used in warfare was invented by David Bushnell (1776). It was a one-man, hand-powered, screw-driven vessel supposed to attach mines to enemy ships. In the US Civil War the Confederate States produced several submarines. Propulsion, the major problem, was partly solved by the Rev. G. W. Garrett, who built a steam-powered submarine (1880). In the 1890s John P. Holland and his rival Simon Lake designed vessels powered by gasoline engines on the surface and electric motors when submerged, the forerunners of modern submarines. They were armed with torpedoes and guns.

Great advances were made during World War I and WWII, which demonstrated the submarine's military effectiveness. The German U-boats were notably efficient , and introduced snorkels to hinder detection while recharging batteries. But none of these vessels could remain submerged for very long, and a true (long-term) submarines awaited the advent of nuclear power. The first nuclear-powered submarines was U.S.S. Nautilus (1955), which in 1958 made the first voyage under the polar ice-cap. The US, Russia, UK, and France have nuclear submarine fleets equipped fitted with ballistic missiles.

Modern submarines are streamlined vessels, generally with a double hull, the inner being a pressure hull with fuel and ballast tanks between it and the outer hull. The submarine submerges by flooding its ballast tanks to reach neutral buoyancy, i.e., displacing its own weight of water (see Archimedes' principle, and dives using its hydrofoil diving planes. Submarines are equipped with periscopes and inertial guidance systems. Submarines are also used for oceanographic research and exploration, salvage, and rescue.

A submersible is a small craft for underwater exploration, research, or engineering. Modern submersibles have evolved from simple devices. Diving bells were open-bottomed devices in which people were lowered into the water. A device called the bathysphere, invented in the 1930s by William Beebe, was a spherical observation chamber. The bathyscaphe, invented in the 1940s by August Piccard, also had a spherical chamber, but this was attached to a much larger hull, which was used as a buoyancy control device. The craft also had propellers powered by electric motors.

A new generation of submersibles has emerged since the late 1950s for engineering and research work. A typical craft has a spherical passenger capsule capable of withstanding water pressure down to about 3,600 m (12,000 ft). Attached to this is a structure containing batteries, an electric motor with propeller, lighting, a mechanical arm for gathering samples, and other technical equipment. A specially designed support ship launches and retrieves the submersible, Some submersibles are unmanned and operated by remote control from the surface.

A nuclear submarine is an underwater vessel powered by a nuclear reactor. The great advantage of nuclear submarines is that they use little fuel and may remain submerged for many weeks, even months. Heat produced by the reactor turns water into steam. The steam turns turbines, which are linked to electricity generators that charge the submarine's batteries. The vessel's propeller may be driven by an electric motor, or by linking its shaft to a turbine. The first nuclear submarine, the USS Nautilus, was launched by the US Navy in 1954. Nautilus travelled 100,000 km (62,000 mi) in its first two years of service, and in 1958 was the first vessel to sail under the ice cap at the North Pole. Britain's first nuclear submarine was HMS Dreadnaught (launched 1963). Nuclear submarines carrying missiles have enormous firepower and are difficult to detect and destroy.