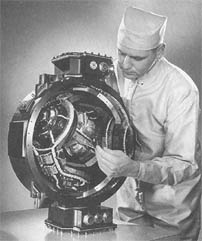 Inertial guidance is a type of guidance system used by airplanes, ships, submarines, space vehicles, and guided missiles, effected by means of mechanisms that automatically adjust the vehicles heading to follow a given flight path. These mechanisms measure inertial forces during periods of acceleration, integrate the data obtained with already known position and velocity, and signal the controls to effect the desired direction, altitude, etc. Accelerometers are mounted on gyrostabilized platforms to isolate them from the vehicle's angular motion; by measuring the forces needed to keep a suspended mass stationary with respect to the moving vehicle, they sense changes in its motion and gravitational fields. The orientation of the accelerometers are found from reference directions provided by gyroscopes. A computer calculates velocities or directions from the instrument signals and can compare these with stored data. The accuracy of the system is improved by a method of feedback called Schuler tuning.