Internal optics of a periscope. 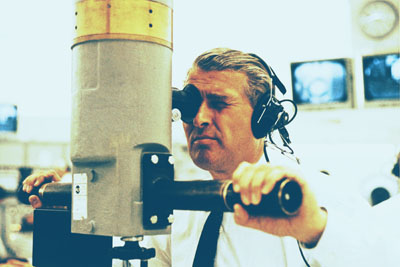 A periscope is an optical instrument that permits an observer to view his surroundings along a displaced axis, and hence from a concealed, protected, or submerged position. The simplest periscope, used in tanks, has two parallel reflecting surfaces (prisms and mirrors). An auxiliary telescopic gunsight may be added. Submarine telescopes have a series of lenses within the tube to widen the field of view, cross-wires, and a range-finder, and can rotate and retract.

I n its simplest form, a periscope consists of two mirrors angled at 45°, one above the other so that an image is reflected from the top of the instrument down to the observer at its base. A submarine periscope (shown in the photo below and the diagram to the right) works on the same principle, but has prisms instead of mirrors and a system of lenses to produce a magnified image or a wide field of view. Optical adjustments can be made with the handles.