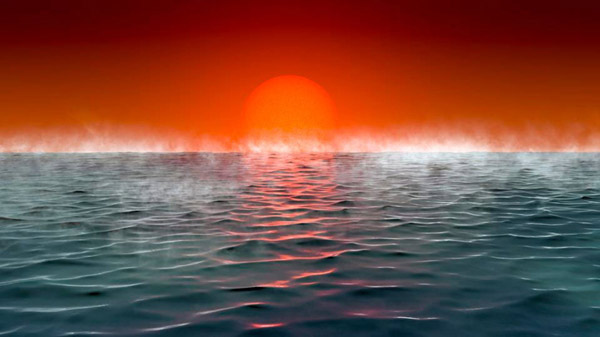 Artist's visualization of a Hycean planet.

Astronomers have identified a promising new place to look for life in the universe – so-called Hycean planets. These are hot planets, bigger than Earth, with atmospheres rich in hydrogen and surfaces that are completely covered by ocean.


Until now, in the search for life outside the solar system, the focus has been on planets similar in size to Earth that orbit their stars in the habitable zone – the region around a star that's just right to allow water to exist permanently on a planet's surface. The advantage of candidate Hycean worlds is that more of them are known and, being bigger, they're easier to observe.


The astronomers at the University of Cambridge who've published the new research think it's possible we could detect signs of life on a Hycean planet within the next two to three years using new instruments such as the James Webb Space Telescope, which is scheduled for launch later this year.


Of the roughly four and a half thousand exoplanets discovered so far, the great majority are between the sizes of Earth and Neptune. If they're rocky they're known as super-Earths and if they're ice giants they're called mini-Neptunes.


Most mini-Neptunes are more than 1½ times the size of Earth and it had previously been thought that the temperature and pressure of their thick hydrogen atmospheres would have been too high to support life. However, from studying the mini-Neptune K2-18b, the Cambridge team found that under certain conditions life might exist on these worlds. This led them to investigate the range of planetary and stellar properties for which these conditions are possible, which known exoplanets might satisfy such conditions, and whether signs of life, known as biosignatures, might be observable.


Potential Hycean planets are up to 2.6 times bigger than Earth and have atmospheric temperatures as high as 200°C. Yet, if they orbit within their star's habitable zone they could have global oceans capable of supporting the same kind of microbial life as found in our own oceans. What's more, potential habitable zones for Hycean planets are much wider than those of Earth-like worlds, increasing the chances for life.


The Cambridge team has come up with a list of potential Hycean worlds for next-generation telescopes to examine for signs of life. All of them are in orbit around red dwarf stars that lie between 35 and 150 light-years away. In fact, one of the targets for the James Webb Space Telescope is K2-18b.


Astronomers will examine the spectra of light we receive from these planets and look for the presence of certain molecules, such as methyl chloride and dimethyl sulfide, that would suggest a biological source. The greater size, higher temperature and hydrogen-rich atmosphere of a potential Hycean planet make the search for such biosignatures much easier than in the case of Earth-like planets. So, there's a very real chance we'll glimpse the first signs of extraterrestrial life on a mini-Neptune waterworld.