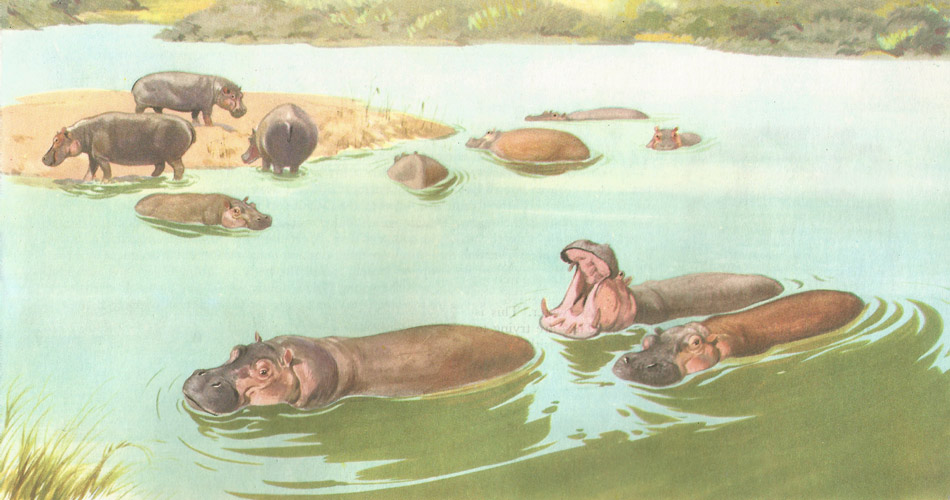 A herd of hippopotamus in an African lake. When the animals are on land a red liquid is produced by glands in the skin, and this has given rise to the myth that they 'sweat blood'. 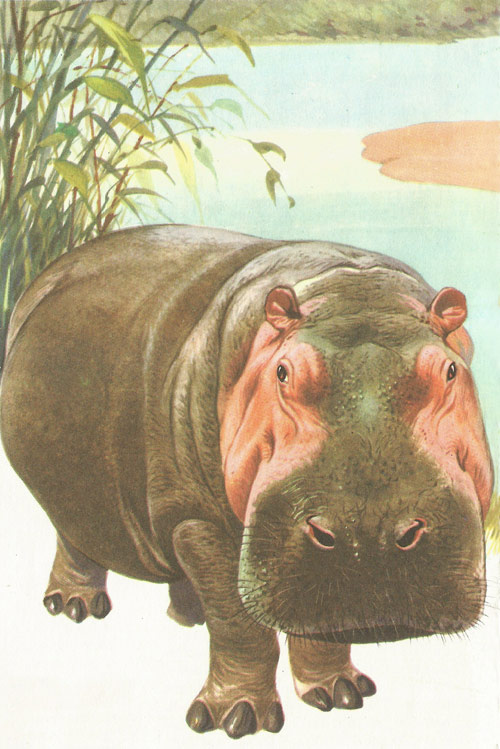 Size of the hippopotamus. 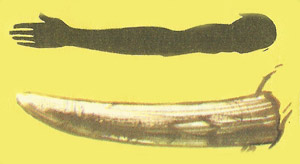 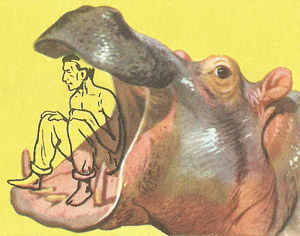 When a hippo yawns, a small man could sit hunched up in its mouth.

A big male hippopotamus may weigh between 2 and 3 tons.

The head of a hippopotamus is so designed that the animal can submerge itself almost completely, but still keep its nose, eyes, and ears above water. In this way it can keep cool under the hottest midday sun.

The hippopotamus has a cousin, the pygmy hippopotamus (Choeropsis liberiensis), which is about the size of a pig. Pygmy hippos are rare, and live in the forests of Liberia, Sierra Leone, and Guinea in West Africa.

The hippopotamus is large, semi-aquatic, mostly herbivorous mammal living in sub-Saharan Africa. It is equally at home on the land and in the water. Its scientific name is Hippopotamus amphibius and the second part of its name, which refers to its species, is most appropriate. The generic name, Hippopotamus, by which the beast is generally known, means 'river horse'. The 'river' part is obvious, but few animals could be less like a horse. However, this is how it appeared to the ancient Greeks. The hippopotamus's closest living relatives in the animal kingdom is not a horse, but the cetaceans (whales, dolphins, and porposes). The hippo has some similarities with the pig. Among the anatomical features it shares with the pig are its feet, which have four toes. Those of the hippopotamus have large nails, or hooves, and are also webbed for swimming. The two animals also have similar teeth, with a tendency for the canine teeth to develop into large tusks. The hippo is a powerful swimmer and can make its way upstream against a strong current. It can also remain under water for several minutes and often walks along the bottom instead of swimming. In spite of its appearance it is not fat: in fact, the percentage of lean meat or muscle on its body is unusually high.

The hippopotamus was much more widely distributed in prehistoric times than it is now: fossil bones show that it lived even as far north as Britain in the Pleistocene epoch. But it is now confined to the tropical regions of Africa.

Hippos tend to be inactive during the day. This is because they are really nocturnal animals, and feed at night. Their natural food is grass, though if they find a field of corn or sugar-cane, they can cause immense damage to the crop. At dawn the hippo returns to the water with two or three hundredweight of grass in its stomach and spends the day digesting it. The young ones are born one at a time, and remain in the care of their mothers for about a year. When the mothers are in the water, their babies often ride on their backs.

The hippopotamus is the heaviest land animal, apart from the elephant and the rhinoceros. Its greatest height is over the hind-quarters, unlike most quadrupeds which are tallest at the shoulders.

The hippopotamus has 40 teeth, but normally only the huge canine teeth or tusks are visible. The lower tusks of male hippos are curved and may reach a length of over 3 feet and weigh as much as 8 pounds.