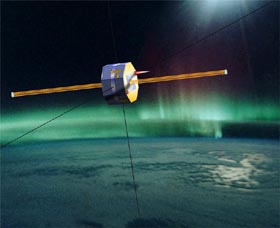 IMAGE (Imager for Magnetopause-to-Aurora Global Exploration) is a NASA satellite that carries some of the most sophisticated imaging instruments ever to be flown in the near-Earth space environment. From an elliptical orbit about Earth's poles, IMAGE's two-year mission is to obtain the first global images of the major plasma regions and boundaries in Earth's inner magnetosphere, and to study the dynamic response of these plasma populations to changes in the flow of charged particles from the Sun. It was the first of NASA's MIDEX (Medium-class Explorer missions).