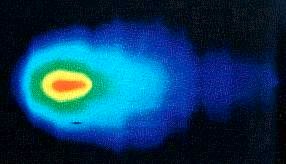 IRAS image of comet IRAS-Araki-Alcock made at a wavelength of 25 microns. The bright red area represents the unresolved nucleus of the comet, while the fainter emission from the tail of the comet is yellow and blue.

Comet IRAS-Araki-Alcock (C/1983 H1) is a long-period comet that made an unusually close passage of the Earth of just 0.031 AU (4.6 million km) on 11 May 1983. Because of this near approach – bettered only by Comet Lexell over the past two centuries – it became quite bright (second magnitude) for a few days even though it was actually a small comet. It was first detected by the Infrared Astronomy Satellite (IRAS) on April 25 and found independently by the Japanese amateur astronomer Genich Araki (1954–) and George Alcock (1912–2000) on 3 May.