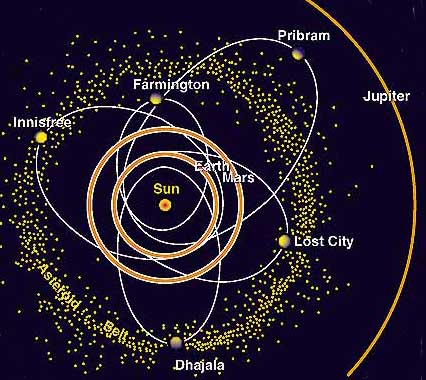 The Innisfree meteorite is only the third meteorite in the world whose passage through the atmosphere was recorded photographically by cameras at more than one place (the first two were the Príbram meteorite and Lost City meteorite. Such photographic evidence is important because it enables a calculation of the object's old orbit and of the area where it is likely to fall. The Innisfree meteorite fell 13 km north of the town of this name, in Alberta, Canada, at 7:17 pm on February 5, 1977. Although an immediate search of the area, by light plane and on foot, turned up nothing, photographic records from two stations in the Meteorite Observation and Recording Program (MORP) network allowed a computer projection of the most likely fall area. Eleven days later, the largest piece of the Innisfree rock (2.07 g) was found only a few hundred meters from the point predicted. Subsequently eight other fragments were found, bringing the total mass recovered to 3.79 kg. Analysis showed Innisfree to be an ordinary chondrite of the rare LL5 type.