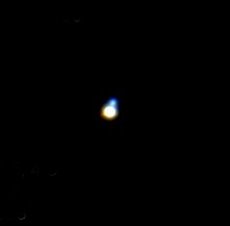 Izar (Epsilon Bootis) is the second brightest star in the constellation Bo�tes. Its name comes from a short Arabic phrase meaning the 'girdle' or 'loin cloth', and means much the same as 'Mizar' that indicates the 'loin' of Ursa Major.

Izar is one of the finest double stars in the sky, consisting of a third magnitude orange giant K star only 3" from a fifth magnitude white main sequence A star. The color contrast, enhanced by the stars' proximity to each other, is so striking that the discoverer, Friedrich Struve, called the pair "Pulcherima," for "most beautiful."

The dimmer A star has a total luminosity of 27 times that of the Sun, while the brighter giant, radiating with 400 solar luminosities, outshines it by a factor of 15. The A dwarf's 8,700 K temperature shows it to be about twice the size of the Sun, while the cooler 4,500 K giant is 33 times as large. Separated by a distance of at least 185 AU, the period is well over 1,000 yr. The A star is about double the solar mass, the K star closer to quadruple.

Class K giants by their natures are evolved, fusing helium to carbon in their cores. More massive stars use their fuel and evolve first. The pair was born some 300 million yr ago as the white A star we see now and a hotter, bluer, and brighter mid class B star. Ten or 20 million yr ago, the brighter star's central hydrogen fuel supply ran out and now it is a bright giant with little time left to it. In a billion years or so, the same thing will happen to the smaller star, and it will become a lesser orange giant. By that time, the bigger star will have ejected almost all of its outer envelope leaving not much more than the old core, which will appear as a dim dense white dwarf about the size of Earth.