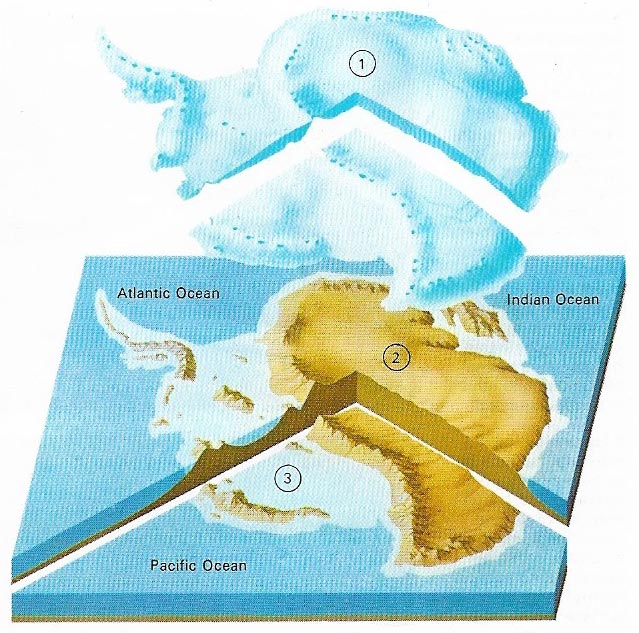 Fig 1. Continental ice sheets are now found only in Antarctica and Greenland. In Antarctica the ice (1)covers not only the land (2) but also permanently frozen sea (3). Beneath the ice the terrain is rugged and variable in height. Because of the weight of the ice, about 40% of the land is depressed below sea-level. If the ice were to melt, there would be a gradual rising of the land, just as the Baltic area is now rising to compensate for the loss of its ice sheet some 12,000 years ago. Because of the meltwater, the sea would at first rise faster than the land, drowning much of Antarctica. 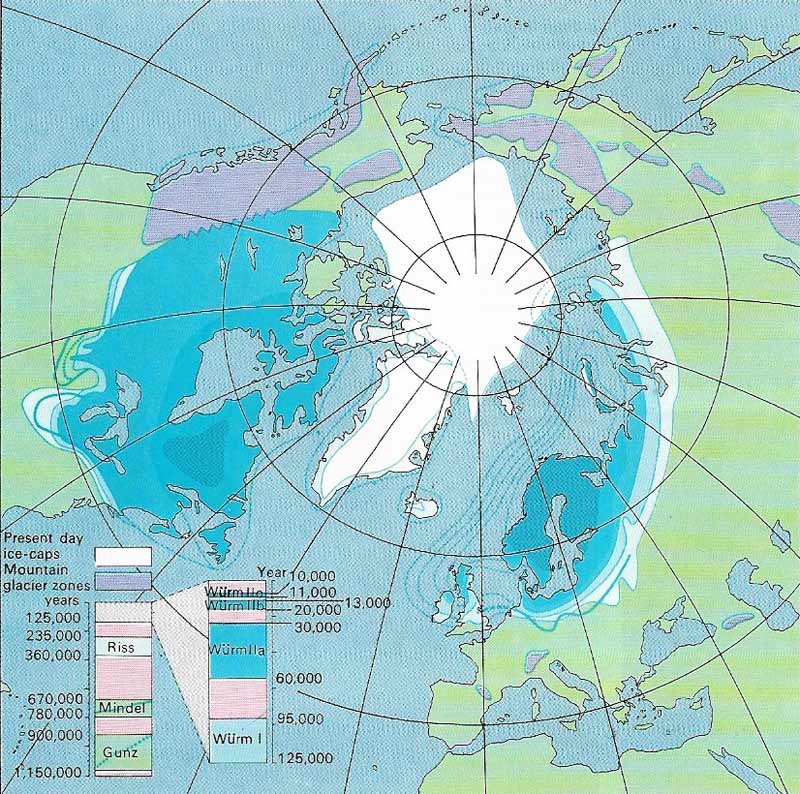 Fig 2. The last ice age, the Pleistocene, consisted of several periods of glaciation separated by interglacial periods of mild climates. The earliest traces of the glacial advance have been found in Europe in Sediments 2,500,000 years old, and represent the Donau glacial stage. This was followed by the Günz (equivalent to the Nebraskan in the American system), the Mindel (Kansan), the Riss (Illinoian), and the four glacial stages of the Würm (Wisconsin). 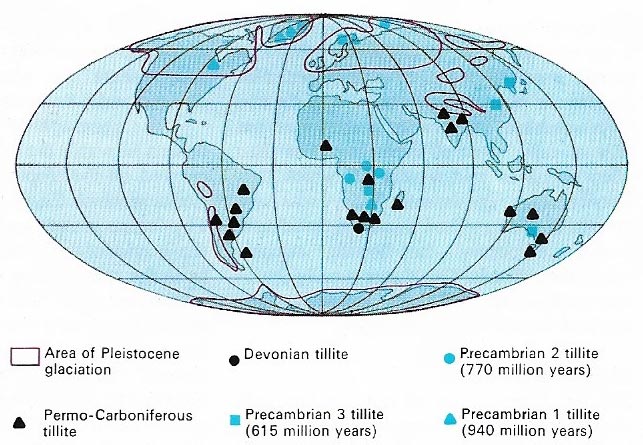 Fig 3. Ice ages have several times swept over various parts of the Earth and, although of short duration by geological standards, have left a durable impression on its crust. The map shows the limits reached by the ice sheets during the last ice age in the Pleistocene (2 million to 12,000 years ago). Evidence for other ice ages comes from tilites, which are consolidated glacial deposits. Also shown are the main locations of Precambrian, Devonian, and Permo-Carboniferous tilites. These wee laid down in high altitudes but have since been moved out of place by continental drift. 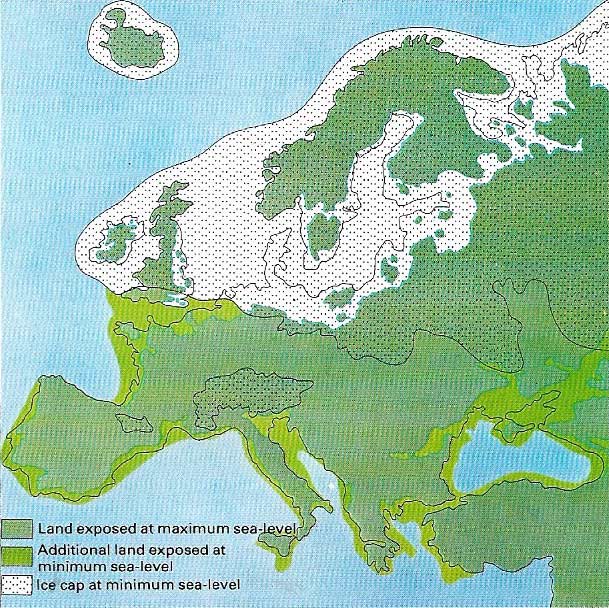 Fig 4. At periods of maximum glaciation, sea-levels were 180 m (590 feet) lower than at present because of the large amount of water frozen in the ice. Many of today's islands were joined to adjacent continental land masses – the British Isles, for example, was part of mainland Europe. Land bridges appeared, especially in such areas as the Bering Strait, These bridges helped the spread of mankind around the world.

Ice ages are periods when glacial ice covers large areas of the Earth's surface that are not normally covered by ice. Ice ages are characterized by fluctuations of climatic conditions: a cycle of several glacial periods contains interglacial periods, perhaps of a few tens of thousands of years, when the climate may be as temperate as between ice ages. It is not known if the Earth is currently between ice ages or merely passing through an interglacial period.

There seem to have been several ice ages in the Precambrian, and certainly a major one immediately prior to the start of the Cambrian. There were a number in the Paleozoic, including a major ice age with a complicated cycle running through the Mississippian, Pennsylvanian, and early Permian. The ice age that we know most about, however, is that of the Quaternary, continuing through most of the Pleistocene and whose last glacial period ended about 10,000 years ago, denoting the start of the Holocene. At their greatest, the Pleistocene glaciers covered about a third of the Earth's surface, or some 45 million km2, and may have been up to 3 km thick in places. They covered most of Canada, northern Europe, northern Russia, northern parts of what is now the United States, and, in the Southern Hemisphere, Antarctica, parts of South America, and some other areas.

Theories about the cause of ice ages include that the Sun's energy output varies, that the Earth moves with respect to its axis, that continental drift may alter global climatic conditions, and that volcanic dust in the atmosphere could reduce the amount of solar heat received by the surface. One or more factors may be involved.

The Greenland and Antarctic ice sheets Fig 1)are the last remnants of an ice age that ended, for the mid-latitudes, about 12,000 years ago, Features such as vast amounts of coarse sediments (now referred to as drift), erratic boulders, river terraces, and raised beaches had been noted by early geologists but they had been ascribed to the biblical Flood ("Diluvian" deposits). It was not until the mid-nineteenth century that there was widespread belief in the Ice Age.

During the past two million years there have been five major glacial advances and five glacial retreats, the last of these being our present period, the Holocene (Fig 2).

Large ice sheets covered the northern continents: most of the British Isles, the North Sea, The Netherlands, northern Germany, and Russia were part of an ice sheet centered on Scandinavia and the Baltic, while mountain glaciers descended from the Alps and the Pyrenees. Siberia and Kamchatka were glaciated, as well as mountains to the south, and in North America the sheet reached Montana, Illinois, and New Jersey, and the Rockies had extensive mountain glaciers. There was also an ice sheet covering Argentina up to a latitude of 40°S, large glaciers over the Andes and an ice cap over New Zealand.

The chronology of the periods of glacial advance and retreat is established by the study of periglacial lake sediments (forming annual layers known as varves), of fossil pollens of plants (shoeing the climatic conditions), of fossil soils between two glacial layers, and of ancient beaches and river terraces which reflect former sea-levels. Other dating techniques involve radioisotopes and tree rings, while micro-fossils in deep-sea sediments and oxygen isotopic ratios from marine fossils provide clues to the then prevailing temperatures.

Dozens of theories have been put forward to account for the origin of ice ages. Those based on purely terrestrial phenomena call for a predisposed position of the land masses such as the present positions of Antarctica and of the landlocked Arctic Sea, which prevent the temperature-evening effects of the sea from reaching the poles; or else they presuppose changes in the atmosphere (allowing a faster rate of heat loss to space) or an increase in atmospheric dust due to paroxysmal volcanic eruptions, so preventing the warming effect of some of the Sun's rays from reaching the Earth.

Other hypotheses are astronomical They propose changes in the Sun's output and changes in the Sun-Earth relationship. One such hypothesis relates the glaciations to the passage of the Solar System through the dust clouds of the spiral arms of the Galaxy, implying an ice age lasting a few million years every 250 million years or so. Scientific evidence supports this theory except for the time about 250 million years ago when no ice age occurred but there was, nevertheless, a distinct cooling of the climate as evidenced by fossil faunal changes.