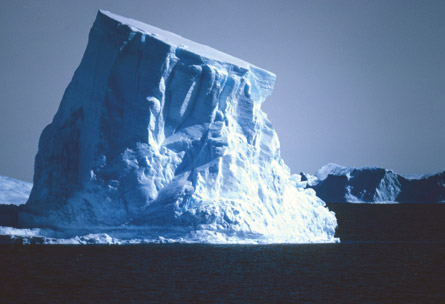 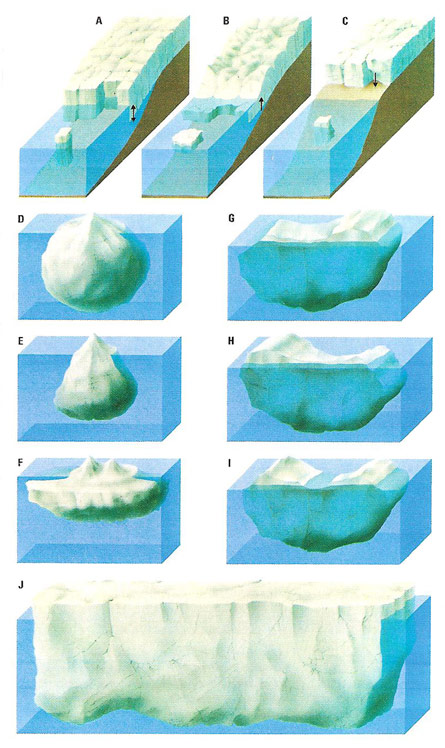 An iceberg is a large, floating mass of ice.

In the Southern Hemisphere, the Antarctic ice sheet overflows its land support to form shelves of ice on the sea; huge pieces, as much as 200 km across, break off to form icebergs.

In the Northern Hemisphere, icebergs are generally not over 150 km across. Most are "calved" from some 20 glaciers on Greenland's west coat. Small icebergs (growlers) may calve from larger ones. Some 75% of the height and over 85% of the mass of an iceberg lies below water. Northern icebergs usually float for some months to the Grand Banks, off Newfoundland, there melting in a few days. They endanger shipping, the most famous disaster being the sinking of the Titanic (1912).

Icebergs form in several ways. When a glacier reaches the sea it floats away from the bed. The movement of waves and tides exerts pressures on this floating ice causing lumps to break away (A). If the glacier is moving rapidly when it reaches the sea, a projecting shelf of ice forms under the water. The buoyancy of the shelf exerts an upward pressure causing pieces to break off (B). The snout of the glacier may be above the level of the sea and hence lumps may break off under the force of gravity and fall into the water (C). The forming of new icebergs is known as "calving". D–I show typical shapes of icebergs.