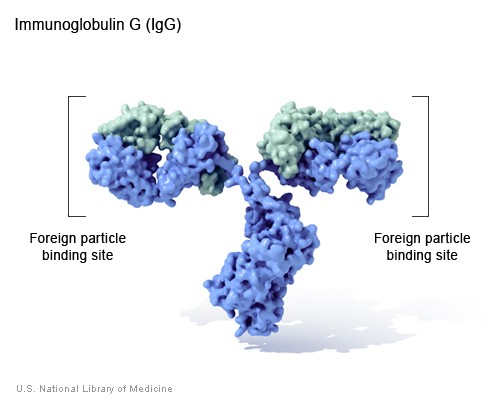 Immunoglobulin is a class of antibody (a type of protein) found in the blood and tissue fluids. Immunoglobulins are produced by cells of the immune system known as B-lymphocytes. Their function is to bind to substances in the body that are recognized as foreign antigens (often proteins on the surface of bacteria and viruses). This binding is crucial in the destruction of the microbes that bear the antigens.

Immunoglobulins also play a central role in allergies and hypersensitivity reactions. In this case they bind to antigens that are not necessarily a threat to health, which may provoke an inflammatory reaction.

There are five classes of immunoglobulin; of these, immunoglobulin G (IgG) is the major immunoglobulin in human blood. The IgG molecule consists of two parts, one of which binds to the antigen; the other binds to other cells of the immune system. These other cells are principally white cells called phagocytes, which then engulf the microorganisms bearing the antigen.

The antigen-binding site of the IgG molecule is variable in its structure, the different versions of the molecule being capable of binding to an almost limitless number of antigens.

Immunoglobulins can be extracted from the blood of recovering patients and used for passive immunization against certain infectious diseases.