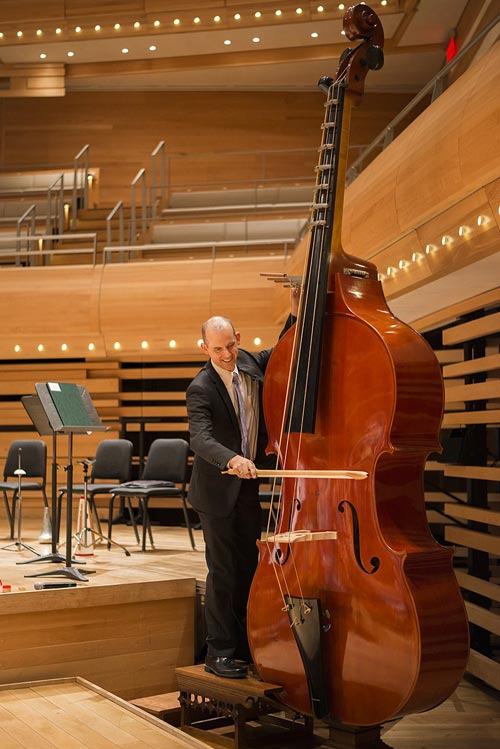 The octobass of the Montreal Symphony Orchestra

Infrasound is sound waves having a frequency below the normal range of human hearing, that is, below about 20 cycles per second (hertz). This range is also known as the subsonic range, because such low frequency waves are felt as vibrations rather than heard as sounds.

American singer Tim Storms holds the Guinness World Record for the lowest voice of anyone on Earth. On 30 March 2012, he produced a sound that was slightly more than seven octaves below the lowest note on a piano. The sound was so low – just 0.189 hertz – that his vocal cords, twice as long as those of an average adult male, would have been vibrating just once every five seconds. That's well into the infrasound range, below about 20 hertz, that's undetectable to human hearing.

Although most musical instruments aren't designed to play outside our normal auditory range – for obvious reasons! – some can produce infrasonic notes. One of these is the octobass, a gigantic version of the double bass. The first octobass, built in Paris around 1750 and now on display in the Musée de la Musique, has three strings and stands 3½ meters (11½ feet) high. A system of levers and pedals, connected to metal clamps on the neck, enables the player to fret the required notes while bowing in the conventional way. Only four functioning octobasses exist in the world today and only one, owned by the Montreal Symphony Orchestra, is occasionally used in performances. The lowest open string on the Montreal instrument sounds the note A0, with a frequency of 27.5 hertz, but an octobass at the Musical Instrument Museum in Phoenix, Arizona, fitted with modern wire-wound strings, is tuned to produce a lowest note of C0 (16.4 hertz), in the infrasound range.

Large pipe organs can go down to C-1, or 8 hertz, which may seem pointless. However, just because we can't hear something that low doesn't mean we can't be affected by it. In 2002, a live experiment called "Soundless Music" was carried out to explore the psychological effects of infrasound. Under the guise of a concert featuring a variety of electronic and deep bass sounds, an infrasound generator was incorporated into the mix. Afterwards, audience members were asked to described what they experienced. Many people reported feelings of anxiety and foreboding, along with cold and tingling sensations. In the setting of a church or cathedral, it isn't hard to see how the lowest notes from an organ could evoke a similar emotional response that might be taken to be the effect of a supernatural or spiritual presence.

French scientist Vladimir Gavreau became a pioneer of infrasonic research following his unexpected encounter with ultra-low sounds in 1957. He and his team of acoustical engineers were working in a large concrete building when the group began experiencing bouts of nausea, which at first were assumed to be due to chemical fumes or some pathogen in the air. Weeks of investigation revealed the true source of the problem: a loosely mounted low-speed motor. The team built special equipment to detect the vibrations from the motor and eventually tracked the cause of the nausea down to 7-cycle-per-second infrasound waves. These waves from the motor induced a resonance in the ductwork and structure of the building, which amplified the original sound and led to its unpleasant physiological effects. The discovery triggered a wave of research into building acoustics in the ultra-low-frequency regime. Today, it's routine in new architectural schemes to test for and eliminate any infrasonic resonances and use sound-proofing where needed along with materials with special sonic properties.

Although the normal limits of human hearing are roughly 20 to 20,000 hertz, depending a lot on the individual and their age, some animals can hear much lower (and higher) sounds than we can. With their giant ears and bodies it perhaps comes as no shock to learn that elephants are among the heavyweights of the low-frequency domain, able both to detect and produce sounds down to 16 or even 12 hertz. Because ultrasound can travel far without much attenuation, elephants can use it to communicate over long distances. That may explain, for instance, how groups of elephants, several kilometres apart, are able to travel in parallel, change direction simultaneously, and move towards each other in order to meet. Baleen whales, such as the blue whale, take infrasound communication to an extreme. Their low-pitched vocalizations can be detected over areas as large as an ocean basin.

Less obviously, ferrets, goldfish, and some types of bird can sense infrasound. Experiments with homing pigeons have shown that they can respond to frequencies as low as 0.05 hertz. It seems they can use infrasound, produced by natural events, and which reverberate off the land and atmosphere, in their navigation. Where the local terrain or temporary atmospheric conditions, such as a temperature inversion, interfere with infrasound transmission, the birds lose their sense of direction.

Thunderstorms, avalanches, volcanoes, large ocean waves, earthquakes, and geomagnetic storms are among the powerful phenomena in nature that generate infrasonic waves. These waves, travelling quickly through the earth, can be picked up by animals in advance of an impending disaster, and even serve as a warning that something destructive is on its way. The earliest reference to animal behaviour of this kind is from Greece in 373 BC, when rats, weasels, snakes, and even centipedes were seen to flee their homes and head for safety ahead of a destructive earthquake. In China, several decades ago, an earthquake forecast was made based partly on unusual animal activity. As a result, many people chose to sleep outside their homes and were thus spared when a large earthquake did strike shortly after.

On December 26, 2004, captive elephants at a tourist site near the coast in Thailand began trumpeting and wailing in the early morning for no obvious reason. They broke their chains and stampeded up a nearby hill, pursued by trainers who'd been awakened by the commotion. But then the trainers heard a far more terrifying sound: the crash of an enormous wave of water as it smashed on the shore, overwhelming everything in its path. More than 200,000 people were killed that day by a tsunami that had been triggered by an undersea earthquake.