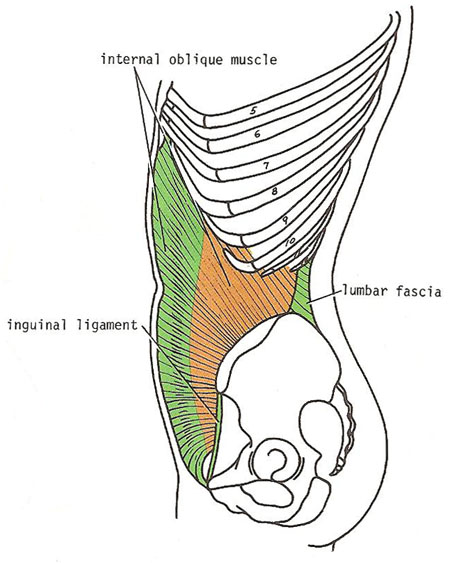 The internal oblique muscle is a broad, thin, muscular sheet that lies deep to the external oblique; the majority of its fibers run at right angles to those of the external oblique. It arises from the lumbar fascia, the anterior two-thirds of the iliac crest, and the lateral two-thirds of the inguinal ligament. The muscle fibers radiate as they pass upward and forward. The muscle is inserted into the lower borders of the lower three ribs and their costal cartilages, the xiphoid process, the linea alba, and the symphis pubis. The internal oblique has a lower free border that arches over the spermatic cord (or round ligament of the uterus) and then descends behind it to be attached to the pubic crest and the pectineal line. Near their insertion, the lowest tendinous fibers are joined by similar fibers from the transverse abdominis to form the conjoint tendon. The conjoint tendon is attached medially to the linea alba, but it has a lateral free border.