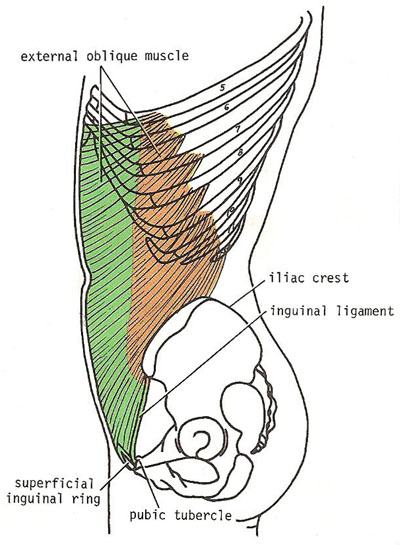 The external oblique muscle is a broad, thin, muscular sheet that arises from the outer surfaces of the lower eight ribs and fans out to be inserted into the xiphoid process (the lowest part of the sternum or breastbone), the linea alba, the pubic crest, the pubic tubercle, and the anterior half of the iliac crest. The majority of the fibers are inserted by means of a broad aponeurosis. The most posterior fibers passing down to the iliac crest form a posterior free border.

Between the anterior superior iliac spine and the pubic tubercle, the lower border of the aponeurosis is folded backward on itself, forming the inguinal ligament. From the medial end of the ligament the lacunar ligament extends backward and upward to the pectineal line on the superior ramus of the pubis. Its sharp, free crescentic edge forms the medial margin of the femoral ring. On reaching the pectineal line, the lacunar ligament becomes continuous with a thickening of the periosteum called the pectineal ligament.