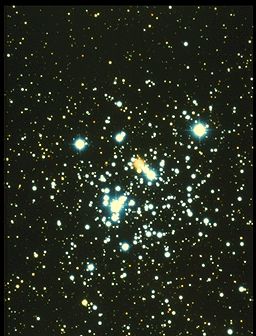 The Jewel Box (NGC 4755) is an open cluster of about 100 stars in the constellation Crux, also known as the Kappa Crucis Cluster after its most prominent member, a blue supergiant (visual magnitude 5.89, absolute magnitude -6.10, spectral type B5Ia). Located near Beta Crucis, the Jewel Box was discovered by Nicolas Lacaille when he was in South Africa in 1751–52. It is one of the youngest clusters known, with an estimated age of less than 10 million years. Nearby lies the Coalsack.