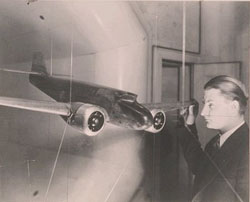 Johnson in the University of Michigan wind tunnel in 1933 with an early single-tail Model 10 Electra.

Clarence Johnson was a prominent American aircraft designer. As the head of the Lockheed Aircraft Corporation's famous 'Skunk Works' design center, Johnson led the effort to build the U-2 reconnaissance aircraft in the 1950s. He also worked on the F-80 Shooting Star – the first American jet aircraft – and the SR-71 Blackbird reconnaissance plane that still holds speed records. During World War II he was responsible for the design of the P-38 Lightning twin-tailed fighter. Johnson worked for Lockheed from 1933 until his retirement as senior vice president in 1975.