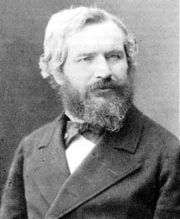 Camille Jordan was a French mathematician who made important contributions to group theory. He was the first to draw attention to the work of Évariste Galois, which had until then been almost entirely ignored. He built on Galois's study by grasping the intimate connection between groups of permutations and the solvability of polynomial equations. Jordan also introduced the idea of an infinite group. He passed on his interest in group theory to two of his most outstanding pupils, Felix Klein and Sophus Lie, both of whom went on to develop the subject in new and important ways.